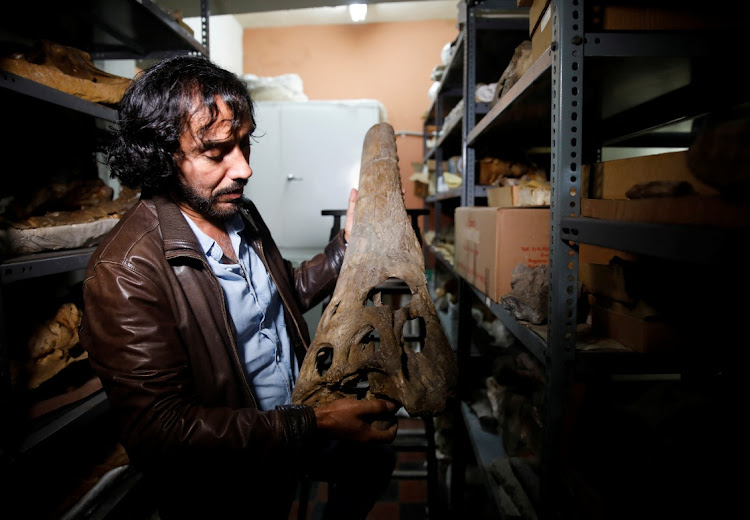 Rodolfo Salas-Gismondi, founder and director of the paleontology department at the Museum of Natural History of the Universidad Nacional Mayor de San Marcos, shows the fossil remains of a crocodile that inhabited the planet seven million years ago, giving scientists clues about how modern day crocodiles, who live in freshwater ecosystems, come from the sea, in Lima, Peru May 16, 2022.
Image: REUTERS/Sebastian Castaneda

The discovery of a prehistoric crocodile fossil in Peru from around 7 million years ago has given paleontologists more clues as to how modern crocodiles, all freshwater creatures in the Andean country, first came to land from the sea.

According to a Peruvian research team that analysed jaw and skull remains of the species, the animal likely would have probably crossed the Atlantic Ocean to the coast of South America, eventually populating what is now southern Peru.

Researcher Rodolfo Salas said his team had collected partial skeletons from the species in recent years, and that after finding a jawbone in Peru's Sacaco desert in 2020, they understood how these animals evolved after living in saltwater.

“The new species of crocodile that we are presenting to the world lived in Sacaco 7 million years ago,” Salas said of the species, which he dubbed Sacacosuchus cordovai. The crocodilian ancestor would have been 4 meters (13 feet) long, he added.

Sacaco is a site where skeletons of prehistoric animals have been found before. Experts say that millions of years ago the desert was a deep seabed inhabited by whales, giant sharks and crocodiles, among other marine species.

“We have concluded ... that all marine crocodiles were animals with long and thin faces, and that there were two morphotypes,” Salas said. “One that fed almost exclusively on fish and another that had a much more general diet.”

The studies were published last week in British scientific journal The Royal Society.

Southern Peru is a rich source of prehistoric remains.

In March, a team of paleontologists led by Salas presented the skull fossil of a 12-meter-long (39-foot-long) “sea monster,” a predator that lived 36 million years ago in an ancient ocean along the central coast of Peru.