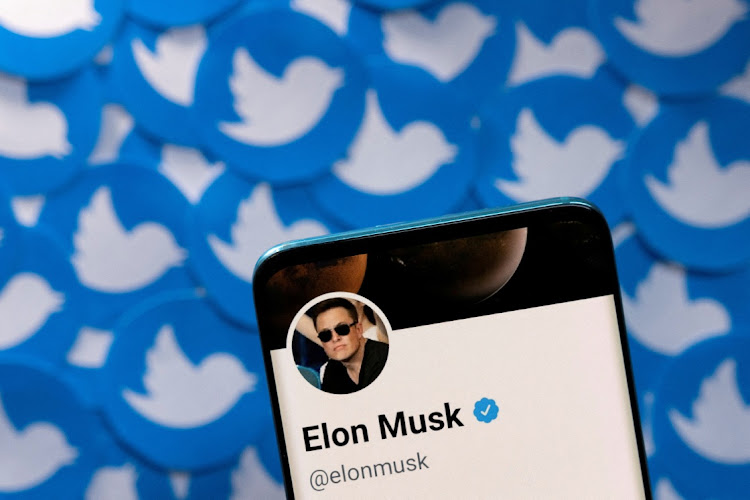 Many investors who specialize in merger arbitrage have long believed that Musk’s ultimate goal is to own Twitter, and that his maneuvering over the past few months has been aimed at getting a lower price.
Image: REUTERS/Dado Ruvic/Illustration/File Photo

Twitter Inc. has been put through the wringer by Elon Musk over the past few months. But some investors are still holding onto the stock in hopes that the deal debacle will end favourably.

While Twitter plunged further below Musk’s $54.20 bid this week after the billionaire said he wants out of the deal, the shares are still pricing in the possibility that the two sides can agree on a transaction at a lower price. Analysts at MKM Partners said Monday the stock could fall as low as $24 if investors conclude the acquisition won’t happen at all. That would imply a further 30% drop from Tuesday’s $34.06 close.

“We still think that there would be a likely scenario for a decent settlement between the parties for the deal to complete,” said Jean-Francois Comte, managing partner at merger arbitrage firm Lutetia Capital. “The discount could range between 3% and 20%,” based on outcomes of similar situations in the past, said Comte, who holds a small position in Twitter.

One sign that some traders aren’t giving up: Even after Musk said he’s abandoning the $44 billion deal, prompting Twitter to sue him, shares are holding up better than peers in this year’s tech rout. Twitter is down 21%, compared with 51% for Facebook parent Meta Platforms Inc. and a whopping 70% for Snap Inc.

Hindenburg Research said in a tweet Wednesday it has “accumulated a significant long position in shares of Twitter,” sending Twitter’s stock up as much as 7.2% in early trading. 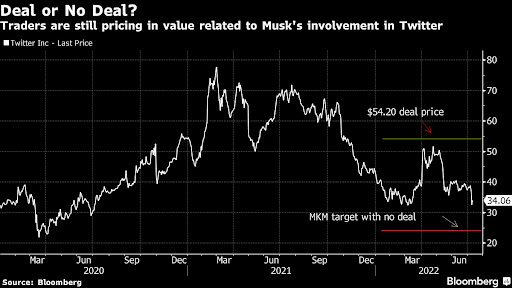 Twitter Inc. has been put through the wringer by Elon Musk over the past few months. But some investors are still holding onto the stock in hopes that the deal debacle will end favorably.
Image: Bloomberg

Many investors who specialise in merger arbitrage have long believed that Musk’s ultimate goal is to own Twitter, and that his manoeuvring over the past few months has been aimed at getting a lower price. There are now various ways the drama could end, from a lightning-quick trial to a protracted court battle or a settlement with a lower price.

Twitter still “could be a good bet,” said Julian Klymochko, founder and CEO of Accelerate Financial Technologies Inc., an investment firm which runs an arbitrage fund. There’s a 40% probability that the deal gets done at a discount and a 10% chance it closes at the original acquisition price, Klymochko said on Tuesday before Twitter filed its suit against Musk.

To be sure, some analysts are now taking the deal out of the equation entirely. “We are now valuing the business on stand-alone fundamentals,” Piper Sandler analyst Thomas Champion said, slashing his price target to $30 from $54.20. “The path to resolution looks nebulous.”

Even so, Musk’s latest move hasn’t prompted any downgrades, with the vast majority on Wall Street — 32 of the 37 analysts tracked by Bloomberg — rating the stock a hold.

“We maintain our neutral/high risk rating given the continued potential of a transaction,” Citi analyst Ronald Josey wrote in a note, while cutting his target to $36 from $54.20 “to be more in-line with peers.”

Tech Chart of the Day

Shares of Peloton Interactive Inc. have slumped 95% from their peak in January 2021, reducing its market value to $3 billion from $49 billion. The fitness equipment maker that rose in popularity during lockdowns is trying to turn its business around as demand drops sharply. The company announced plans on Tuesday to cease in-house manufacturing and rely solely on partners for production, marking one of the most dramatic steps yet to simplify its operations and reduce costs. Shares of Peloton were trading 3.5% lower on Wednesday.