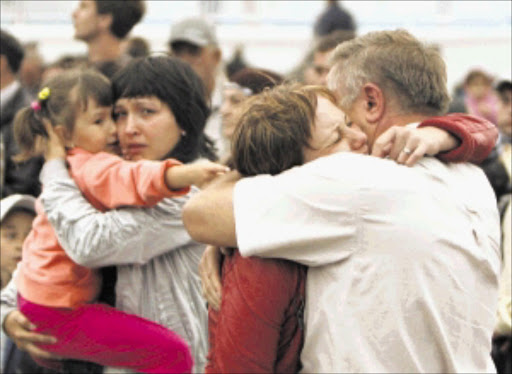 Family and friends meet passengers of the Bulgaria tourist boat, which sank in Russia's Volga River on Sunday. As many as 128 people may have drowned, many of them children Picture: ROMAN KRUCHININ/GALLO IMAGES

Russia said there was little hope of finding any more people alive yesterday after an overloaded tourist boat sank in the Volga River, killing as many as 128.

It was Russia's worst river accident in 30 years.

Eighty people were rescued on Sunday after the Bulgaria, a double-decked river cruiser built in 1955, sank 3km from shore in a broad stretch of the river in Tatarstan.

Emergency Situations Minister Sergei Shoigu told President Dmitry Medvedev that there was little hope of finding more survivors as divers brought dozens of bodies up from the vessel.

As many as 60 of the passengers might have been children, Russian media reported, and survivors said about 30 children had gathered in a room near the stern of the boat to play just minutes before it sank.

"Practically no children made it out. There were many children on the boat, very many," survivor Natalya Makarova said.

She had lost her grip on her daughter as they had struggled to escape.

"We were all buried alive in the boat like in a metal coffin," said Makarova, who escaped through a window. "I practically crawled up from the bottom. My 10-year-old child was with me, I held onto her as long as possible . I couldn't hold on."

Medvedev said the boat would not have sunk if safety rules had been observed.

"According to the information we have today, the vessel was in poor condition," Medvedev told a hastily convened meeting of senior ministers at his Gorki residence outside Moscow. "The number of old rust tubs which we have sailing is exorbitant."

He called for a "total examination" of passenger transport vehicles in Russia and announced a nationwide day of mourning today.

Prime Minister Vladimir Putin sent his condolences to family of the deceased.

Cruises on the Volga, which cuts through the heart of Russia hundreds of kilometres east of Moscow and drains into the Caspian Sea, are popular among Russians and foreigners.

Rescuers said they had raised 48 bodies to the surface, but divers had seen more bodies trapped in the restaurant cabin of the Bulgaria, a 78m craft the Emergency Situations Ministry said was designed for as many as 140 passengers.

There were 208 people on board, including 25 unregistered passengers, Emergencies Minister Shoigu said.

A spokesman for the Prosecutor General said the Bulgaria was overloaded, had no licence to carry passengers and had a problem with its left engine.

Survivors said the boat listed to its side and sank in minutes on Sunday.

Mikhail Korbanov, the editor of Russia's River Transport magazine, said the sinking was the most deadly river accident since the Alexander Suvorov crashed into a railroad bridge on the Volga in 1983, killing at least 176 people.

There were sobs of relief as anxious relatives greeted survivors who were brought to the port in Kazan, Tatarstan's capital, late on Sunday.