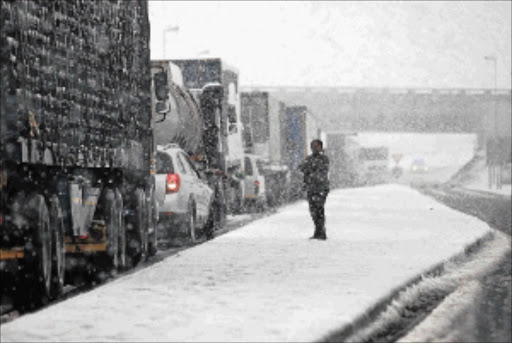 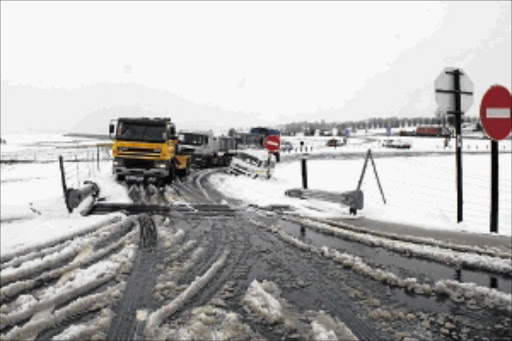 Icy weather has caused havoc throughout the country as highways were blocked, rail services suspended, with drivers rescued by helicopter, and a ship running aground in heavy seas.

While hundreds of families in the Free State, KwaZulu-Natal, Mpumalanga and Eastern Cape built snowmen and played in the snow, those living in informal settlements and rural areas wished away the icy weather.

Schools and businesses were forced to close, while the thick blanket of snow left at least 3000 truck drivers and motorists in a 10km traffic jam on the N3 highway between Johannesburg and Durban, from the Wilge toll plaza, near Villiers, to the Tugela toll plaza in Ladysmith.

While extreme cold weather was forecasted for Gauteng, temperatures were mild in the province.

Forecaster Ezekiel Sebego said the chance of forecasted snow in the province "has passed". "It won't snow in Gauteng," he said.

Transport Minister Sibusiso Ndebele said a joint national operations committee has been activated to deal with any eventuality on the country's roads.

He urged road users, particularly those travelling between Durban and Johannesburg, to postpone their trips until the snowfalls subsided.

Truck driver Mannie Ragubeer, caught in the backlog of trucks, said: "The snow is a beautiful sight but we are suffering in the cold. I just want to go home and get into bed."

Kimal Ramjiwan, a salesman who missed a national sales meeting when his car broke down near Van Reenen's Pass, said that, while he was excited to have witnessed the snowfall, he was desperate to be in bed with an electric blanket.

"I have two jackets on and the thickest pair of socks, and I am still so cold," he said.

Long-distance train services were cancelled, with two train drivers having to be rescued by air force helicopters after their trains got stuck between Newcastle and Volksrust.

In Salt Rock, north of Durban, a 164m bulk tanker was pushed ashore by swells up to 5m high.

The tanker had broken its anchor and drifted towards Salt Rock on Monday night.

The South African Maritime Safety Authority yesterday said salvagers have been instructed to remove the fuel on board to prevent an environmental hazard.

Sebego said that while the sun might make a brief appearance today, South Africans should brace themselves for another week of cold weather.

"It's going to be very cold . This is winter, so this is expected," he said.

"We are having none of the icy cold weather that other parts are experiencing," she said.