State talks the talk, but fails to protect 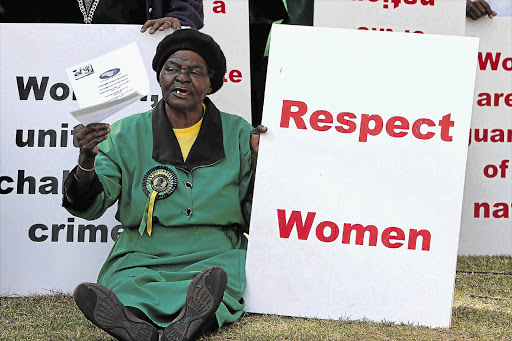 Research out today paints a bleak picture of the failure by law-enforcement officers to understand the Domestic Violence and Sexual Offences acts and their obligation to victims Picture: HALDEN KROG

The failure by police, prosecutors and the Department of Justice to enforce two key laws have left the country's women vulnerable to wife-beaters and rapists.

National research conducted by the Tshwaranang Legal Advocacy Centre, which will be released today, paints a bleak picture of the failure by law-enforcement officers to understand the Domestic Violence and Sexual Offences acts and their obligation to victims.

This is despite the Domestic Violence Act having been in force for the past 13 years, and the Sexual Offences Act for four years.

The research also reveals an alarming gap between what police, the National Prosecuting Authority and the Department of Justice are saying and what they are doing to protect women.

Some of the findings - arrived at following analysis of statistics, parliamentary records, strategy documents and annual reports - include that in regard to the Domestic Violence Act:

The ICD recommended disciplinary action to police bosses in 82% of the cases, but officers in only 48, or 5.1% of them, were disciplined; and

In regard to the Sexual Offences Act, the report found that:

At the Johannesburg Central Police Station, a 379% year-on-year increase in sex crimes was reported, followed by 452.2% decrease the next year.

Under the Domestic Violence Act, victims can seek protection orders and expect help from police to do so.

About 160000 cases, filed as serious assault or attempted murder, were reported by women in 2009/10. It is difficult to say how many of these cases involved domestic violence because police do not report the relationship between women and their attackers.

Researchers found that in a sample of 942 domestic violence cases reported to a police station, hospital and magistrate's court in Mpumalanga, only 63 cases (6.7%) resulted in criminal charges.

The Sexual Offences Act, which took 10 years to draft, has proved problematic for police because 59 different sexual offences - from public indecency to exposing a child to pornography - are included in it.

This makes it very difficult to track trends in sex crimes.

Lisa Vetten, director of the Tshwaranang Legal Advocacy Centre, said: "[The report] is an attempt to show government that the gap between what you say and what you do is just too great."