The man they call Violence 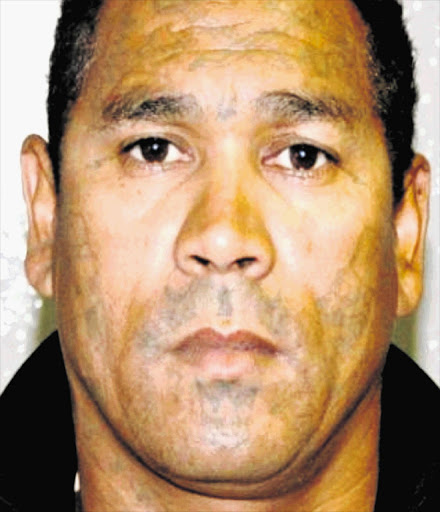 George Thomas, also known as 'Geweld' (Violence) is on trial for murder, extortion, robbery and conspiracy

South Africa's biggest gang trial has lifted the veil on the "criminal enterprise" behind a trail of dead bodies and extortion, and an arsenal of weapons.

Nineteen members of the country's most vicious gangs, the 28s and the 26s, are being prosecuted under the Prevention of Organised Crime Act. They are facing 167 charges in a marathon trial at the High Court in Cape Town that is likely to end only in 2014.

This week the public gallery was cleared for the testimony of a terrified witness, flanked by a bodyguard. The witness told the court - in which journalists were permitted to remain - that the "enterprise" had tried six times, over two years, to assassinate gangster Curtis Esterhuizen from the rival Clever Kids gang.

A day later, three people, including alleged 28s gang boss George Thomas, were arrested by police on patrol after a shooting incident in Bishop Lavis.

Thomas was allegedly in the back of a bakkie with a rifle fitted with a telescopic sight and silencer, while two men sat in front with a box of ammunition.

In a third incident on September 8 2008, two people were shot at in the street where Esterhuizen lived. One was paralysed and is now a witness in the trial.

During the fourth attempt, on November 23 2008, gunmen shot and killed Marvin Esterhuizen after he was mistaken for his brother.

Curtis Esterhuizen was shot in the head at point-blank range on November 2 2009 but survived - and later declined an offer to be placed in witness protection.

Five months later he was shot dead while riding a bicycle in Bishop Lavis.

National Prosecuting Authority Advocate Catherine Breytenbach told the court that the 28s operated as "a criminal enterprise" under the leadership of Thomas - who is known on the Cape Flats by his nickname "Geweld" (Violence).

Sharing a seat in the dock with him is Ashraf "Arab" Ryklief, a 26s gang leader.

The two gangs have often clashed in bloody turf wars but, the state alleges, conspired to kill the father of a state witness in the trial.

Cecil Barnes, 54, was gunned down in his kitchen in Bishop Lavis on October 16 last year. His son, Reagan Barnes, is a key witness against Thomas.

Cecil Barnes declined an offer by the state to be placed under witness protection along with his son.

Breytenbach, one of three prosecutors in the case, said the state would call 370 witnesses - several of them in witness protection.

NPA spokesman Eric Ntabazalila said these included six witnesses with 204 status (participants in a crime given immunity from prosecution in exchange for their testimony) and "about" 20 other witnesses.

Several state witnesses have been killed, allegedly on the instructions of Thomas while he has been behind bars since his arrest in 2008.

One of the alleged hit orders - to kill Andrew Williams on May 5 2008 - was allegedly issued over the phone from inside a cell at the Delft police station.

Among the alleged murder victims were Haywin Strydom and Nydene Davids, both state witnesses.

Mark Ontong was murdered while he was in the process of becoming a state witness.

The three prosecutors and investigating officers in the case have been assigned bodyguards after receiving threats.