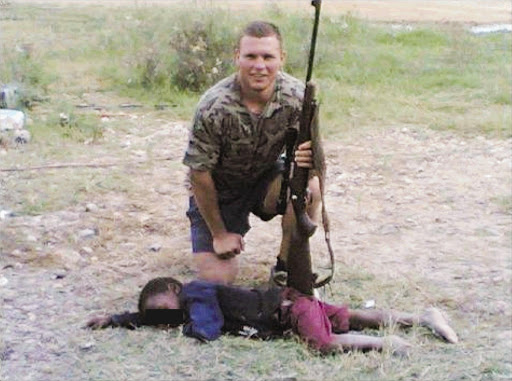 This is the Facebook picture that has sparked a police investigation. The police are asking members of the public who can identify the man in this picture - which may have been manipulated - to come forward to assist them in their investigation. We have obscured the child's face to protect his identity, but child advocacy groups are concerned about the youngster's well being

The Hawks have launched an investigation into an image on Facebook in which a white man with a rifle poses over the apparently lifeless body of a black child - like a hunter celebrating his kill.

The undated picture is on the social networking site in the profile of a user called "Eugene Terrorblanche", a play on the name of the murdered leader of the Afrikaner Weerstandsbeweging (AWB). As of yesterday, "Terrorblanche" had 590 "friends".

While it is not known if the photograph is genuine or has been manipulated, a child protection charity has expressed concern for the well being of the youngster.

The search is now on for the person or persons responsible for the picture, for whoever created the user profile and for those who have seen the photograph but failed to report it.

The authorities have suggested that everyone party to the posting - including those who have seen the picture - could face prosecution and, if convicted, a jail sentence.

This is regardless of whether the picture is faked.

Minister of Police Nathi Mthethwa's spokesman, Zweli Mnisi, said his boss had ordered an "immediate investigation" and called on the man in the picture - or anyone who recognised him - to come forward to assist in the probe.

Mnisi said: "If, indeed, it reflects a real incident, those responsible must be severely punished."

The investigation was sparked when the Sunday Times presented the link to the site to the authorities.

Child advocacy groups said the production and dissemination of the picture violated several laws, including the Children's Act, the Films and Publications Act and the Criminal Procedure Act.

The Minister of Social Development, Bathabile Dlamini, yesterday slammed the photograph, saying that any adult threatening a child must be condemned.

The Facebook user, who has few personal details in his profile, claimed to have attended school in Krugersdorp, west of Johannesburg, and that he was "self-employed".

When using that alias, he said he was in the business of selling stun guns and pepper spray.

HisFacebook friends include a mechanic from the West Rand, a supermarket manager from Boksburg on the East Rand, a housewife from Upington in the Northern Cape and a teacher from Edenvale, east of Johannesburg.

The picture was put on Facebook on June 24 last year - and so far not one of the user's "friends" has posted a comment condemning it.

The director of Women + Men Against Child Abuse, Miranda Jordan, said she found it "incredibly disturbing" not knowing whether the child in the picture was hurt or dead.

"I couldn't believe what I was seeing ... this is sickening and disgusting. Is this child hurt? Is he dead? Who would take this kind of picture?

"This hate image incites racism that almost all South Africans have fought so hard to eradicate," shesaid.

Those who commented favourably on the image could be charged and held accountable, she said.

"Anyone living in South Africa who has viewed this image of an abused child and has not reported it can be charged under the Children's Act 38 of 2005, which stipulates that, as a witness to the abuse of a child, you must report it to your nearest police station."

Experts said it would be difficult to confirm the photo's authenticity, but the authorities were hopeful someone would recognise the adult in the image.

Alternatively, they hope that the man (if he is also an unsuspecting victim) or friends who know the identify of the Facebook user will come forward with information.

South Africa has not prosecuted anyone for posting offensive material on Facebook, but law-enforcement agencies in the US are increasingly obtaining warrants to get users' details.

They can even request or subpoena information from Facebook.

Vogel of Kidz Clinics said that, in terms of South African law, the person in the picture could be charged with murder, grievous bodily harm or, in terms of the Children's Act, with the harm or ill-treatment of a child.

"Once an image is posted on the internet, it can never be deleted. So, for example, this hate image will be linked to this young man and this child for the rest of their lives. This is a gross violation of this child's well-being and privacy," said Vogel.

A police computer expert said an investigation of this nature would determine, among other things, if the child was harmed in the making of the image.

"If the picture has been photoshopped, those responsible for producing such an image can also be charged for child abuse," he said.

Experts on children's rights agreed that the Children's Act made it a crime to expose a child to behaviour that might harm him or her psychologically or emotionally.

Meanwhile, Polela said the person responsible for the picture and those who posted it on a social networking site were spreading "hate speech".

"As you would probably expect, there are many South Africans who will feel deeply offended by this. I am," he said.

Web and digital media lawyer Paul Jacobson said the first step would be to identify the man in the picture.

But he said it was unfair to single out social media networks for the racist material, saying "these people were like this before Facebook".

Police could also contact the social network for help. "This is a clear violation of Facebook's policies and, if put under enough pressure, I am certain (they) will react and assist investigations," Jacobson said.

Local internet service providers could be forced to help track down the user. "It is definitely in the public interest," Jacobson said.