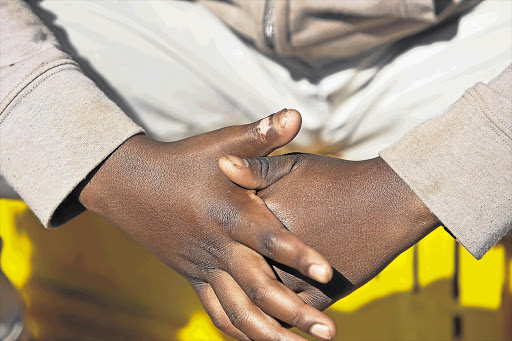 Benjamin Amogaleng Nakedi, 8, whose thumb was operated on after he was beaten Picture: HALDEN KROG

An eight-year-old boy has for more than two months had to face a teacher who allegedly beat him so badly that the boy's hand had to be operated on.

Benjamin Amogelang Nakedi, a Grade 1 pupil at Frikkie Smidt Primary School, in Skeerpoort, North West, was beaten with a board duster on June 7 and spent a week in hospital, undergoing two operations to remove a wood chip embedded in his right thumb. His parents agreed he could be named.

More than two months after the assault, neither the Education Department nor the police had taken action against his female teacher.

It was only after a query from The Times on Thursday that officials acted and police arrested Tebogo Marothong.

According to Benjamin's family, they reported the beating to the school, then to the district office of the education department.

When there was no response, the family reported the matter to the police.

Provincial education spokesman Paul Ntlatleng said the department was aware of the incident and the teacher had been charged.

He was unable to give an exact date or explain why the teacher had not been suspended, but said the matter was being investigated by the department's labour relations directorate.

Ntatleng condemned the assault, stressing that corporal punishment was illegal and should not be applied under any circumstances.

Police Lieutenant-Colonel Lesego Metsi confirmed that a case of assault had been opened on July 15 and that the arrest was effected only on Thursday.

Metsi said that Marothong had appeared in the Brits Magistrate's Court on Friday on a charge of assault with intent to do grievous bodily harm.

"Her case was postponed to September 19 for further investigation and she was released on warning."

Benjamin said on Friday that he and his classmate had been singled out for making a noise.

"We were not the only ones talking. The whole class was making a noise, but she punished only the two of us.

"She ordered us to put our fingertips together and [she] beat us five times each with the duster on the right fingertips. It was painful.

"At home it was my turn to wash dishes, but I could not do it because of the pain in my thumb. I went to bed still in pain and in the morning the whole thumb was swollen," he said.

Benjamin said his younger brother saw that there was a "piece of a plank embedded in my nail".

The boy was treated at Brits Hospital on June 8 and referred to Dr George Mukhari Hospital, in Ga-Rankuwa, for specialised care.

According to his sister, Nozindlela, 22, the family had to borrow money from neighbours and friends to take him to Ga-Rankuwa.

Nozindlela said the family was angry about the teacher's actions and had, to date, received no apology.