Moyo back behind bars 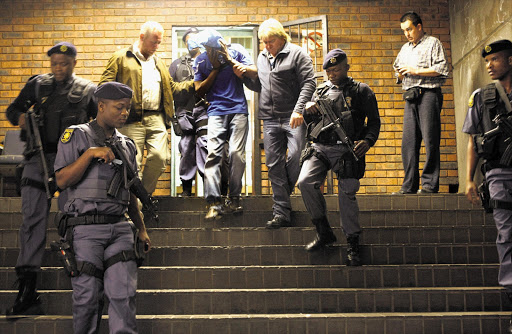 Moyo, who appeared in court on charges of robbery with aggravated circumstances on August 11, escaped from the court's holding cells after leaving his crutches with one of his co-accused, even bowing to a magistrate in court on his way out.

Yesterday, the man was handcuffed, his feet were shackled and seven heavily armed members of the police's Tactical Response Unit stood guard in the court while he was appearing.

He looked healthy and no crutches were in sight.

Moyo, identified by the police as one of South Africa's most wanted criminals, did not bother with a bail application yesterday.

He told his lawyer, Virushka Mistry, to abandon the application.

"I received instructions from my client that he will abandon the bail application because he understands that he has no reasonable prospects," she said.

Moyo, a Zimbabwean, was arrested in Hillbrow, Johannesburg, on Sunday night.

He was found in a car with two other Zimbabweans.

On the day of the escape he appeared in court with three co-accused: Khubulani Sibanda, Thabane Sibanda, and Leon Ncube for a bail application. The application was postponed because their attorney was involved in a car accident.

Moyo and his co-accused are facing charges of robbery with aggravating circumstance and possession of an unlicensed firearm, but the police say he is linked to more than 30 bank robberies.

The robbery for which he was charged was at Standard Bank, in Hatfield, Pretoria, on April 19. R30 000 was stolen.

The matter was postponed to September 16, when the four will make their bail applications.