Pupils go on the rampage after leaders' arrest 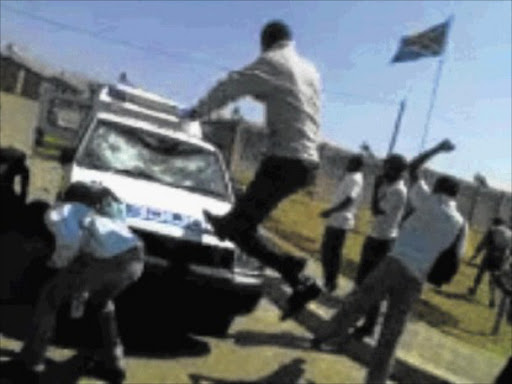 The Gauteng department of education has been forced to take drastic action against one of its worst- performing schools, where a riot landed two pupils and a police officer in hospital.

Pupils at Cosmo City Secondary School, northwest of Johannesburg, refused yesterday to return to classes after break because of grievances with their principal and the department .

When police were called in and reportedly put three of the pupil leaders in the back of police vans, some students attacked two of the vehicles with rocks, smashing windscreens, pulling off accessories to release their friends.

Police called in back-up, who fired rubber bullets at protesting pupils who retaliated by pelting them with rocks.

One 16-year-old pupil said she was "really upset".

"Our friends and classmates have been hurt, and they're not even friends with those who were damaging the cars."

Pupils said they had major issues with the principal of the school who they claimed was "eating their money".

Pupils claim that they do not have textbooks, that their principal hires substandard teachers who allow pupils to sleep in class and that they have not been allowed into their computer lab since the beginning of the year.

They say they plan to "strike again tomorrow" but the department of education yesterday took drastic action to avert any further protests.

According to a press statement, the department has placed the school under administration and has disbanded its governing body. It also plans to apply for an urgent interdict to prevent parents and a "handful" of pupils from disrupting schooling.

The department said this was necessary because attempts to mediate an ongoing dispute between the governing body's chairman and the school's principal had failed.

Police spokesman Karen Jacobs confirmed that a policeman had been badly injured, but she could not verify reports that two pupils had been taken to hospital.