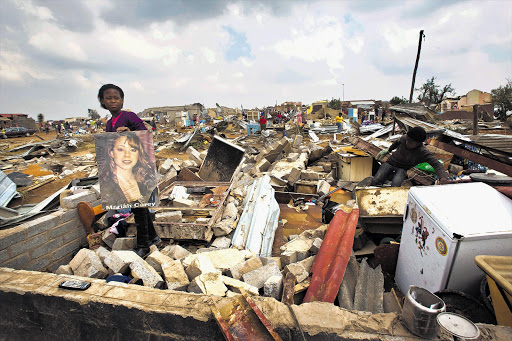 A young girl recovers her Mariah Carey poster from where her room used to be after a tornado hit Duduza township, near Nigel, killing one person and injuring more than 100. File photo.
Image: HALDEN KROG

On Tuesday, local aid organisation Gift of the Givers pledged R2 million to the residents of Duduza, on the East Rand, Gauteng.

The SA Red Cross distributed blankets to people affected by the tornado in Ficksburg, Free State. It also fed over 600 Duduza residents at a local multi-purpose centre on Tuesday morning.

Eight-year-old Xolani Mkhatshwa died, 166 people were injured and 2790 were left homeless after the tornado descended on the Duduza township, near Nigel on Sunday night. Over 550 homes were destroyed.

Gift of the Givers promised to cover Mkhatshwa's funeral expenses.

In Ficksburg, on the same night, nine-year-old Thabane Mkhekhe died, 42 people were injured and over 1000 houses were destroyed.

On Tuesday, Gauteng premier Nomvula Mokonyane thanked South Africans for coming to the help of the people in Duduza.

"The compassion and the spirit of ubuntu that has been displayed by South Africans of all hues to the many families who are affected by the devastating impact of the tornado must be lauded," she said.

"To those who have donated foodstuffs, blankets and their time, we thank you. It is at times such as these that one is truly humbled to lead a province of people with such empathy."

"Nature has disrupted the lives of our people. We are in the process of profiling each household, and organising a team to co-ordinate the relief efforts."

Gungubele said the extent of the damage still had to be assessed.

Home Affairs Minister Nkosazana Dlamini-Zuma said her department would send satellite-enabled vehicles to both towns to assist residents who had lost documentation.

"As stated in our previous commitments, the destruction of such documents as IDs, birth, marriage and death certificates due to floods, fire, and tornadoes will be replaced free of charge," Zuma said.

The Gauteng ANC said the tornado spelled "unprecedented hardship" for the people in Duduza.

"When disasters occur they hit the poorest and the most vulnerable the hardest. The state of our planet makes [sure that] everyone has to work hard at preventing, reducing, and mitigating disaster risk," spokeswoman Dumisa Ntuli said.