Gauteng farmers reach out to Duduza 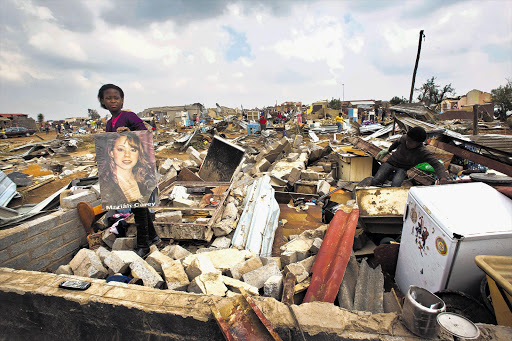 A young girl recovers her Mariah Carey poster from where her room used to be after a tornado hit Duduza township, near Nigel, killing one person and injuring more than 100. File photo.
Image: HALDEN KROG

Food items have been donated to the Duduza community by farmers in the area, after a tornado ripped through the settlement at the weekend, Agri SA said on Tuesday.

"Duduza is our neighbour and in agriculture neighbours help each other in times of need," Agri Gauteng president Andre Botha said in a statement.

An eight-year-old boy died, 166 people were injured and 2790 people were left homeless after the tornado descended on the settlement near Nigel, on Sunday night. Over 550 homes were destroyed.

Duduza was declared a disaster area on Monday.

A call was made to all Agri SA members to donate to the Duduza community.

"The response which came with offers of food was immediate and overwhelming and there is appreciation for the human kindness shown by members of the organisation," Botha said.

The first food was delivered on Monday before the relief infrastructure was properly in place. It included more than four tons of maize meal, eggs, and crates with vegetables.

Many farmers in the surrounding Klip River, Heidelberg and Nigel area were also affected by the storm.

Gauteng premier Nomvula Mokonyane thanked South Africans for coming to the assistance of the victims.

"The compassion and the spirit of ubuntu that has been displayed by South Africans of all hues to the many families who are affected by the devastating impact of the tornado must be lauded," she said on Tuesday.

Mokonyane said the province had set up a joint operations centre to co-ordinate relief efforts, and to install toilets and water tankers.

Agri Gauteng called on farmers in the area to further assist the community. Donations could be made to the General Manager of Agri Gauteng Dirk Hanekom at 012- 643-3400 or 082-313-0042 or via e-mail on Dirk@agrisa.co.za.