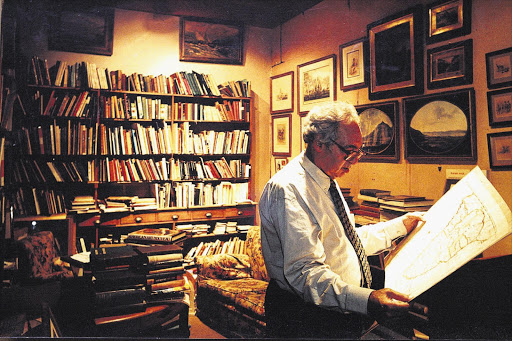 ROBIN Fryde, who has died in Johannesburg just before his 81st birthday, was a world authority on Africana and ran one of South Africa's most distinguished bookshops for almost 50 years.

Frank R Thorold's Africana and legal booksellers, considered a gem of its kind by scholars, librarians and collectors around the world, supplied sought-after books to the US Library of Congress, the universities of Yale, Harvard, Princeton and Wits, and most of the big legal firms in Johannesburg, among others.

If you wanted antiquarian books, rare books, out of print books, first editions or limited editions, you went to Thorold's.

It attracted visitors from around the world, including royals from the Middle East who were keen collectors of antiquarian books, and hundreds of requests for rare and first-edition Africana which only Fryde could find.

Harry Oppenheimer, a keen and knowledgeable collector of Africana, was a client and close friend of Fryde's and occasional visitor to his bookshop, which occupies the third and fourth floors of a building in Harrison Street in the centre of Joburg.

Fryde was born in Cape Town on October 12 1930. After gaining his LLB from the University of the Witwatersrand he joined the legal department at Rand Mines.

He bought the business in 1962, following the death of founder Frank Thorold.

The original shop had opened in 1904. Thorold's source of income at the time came from Singer sewing machines for which he had the South African agency. He found space in the corner of his shop for some books as well, and gradually this grew into Thorold's booksellers.

His heirs weren't interested in the shop, and when it came up for sale, Fryde snapped it up, thinking he would run it as a hobby and diversion from his job at Rand Mines. It wasn't long before it became his life.

He ran it alone for two years before enlisting the help of a partner, Rosemary Block, who emigrated to Australia in 1976.

Her place was taken in 1982 by Lisbon-born Carlos Alves, who was studying economics in Mozambique and used to come to Thorold's to buy books. In 1998, Fryde proposed to Alves and they wed, even though gay marriage was legalised only in 2006.

Fryde was a large, wild-haired man with the girth of a gourmet and seemingly inexhaustible energy. He had an encyclopaedic knowledge of a range of subjects, which he accumulated from years of reading newspapers and journals. He subscribed to most of the local newspapers, Finance Week, Financial Mail, The Spectator, The New Yorker, FT Weekend, Fortune, Forbes and a whole lot more.

He went through them diligently, paying special attention to the gardening and gastronomy sections, noting what to plant and when, and what restaurants in Paris, London and New York he should visit when next in town.

He attended an average of two international book fairs a year, including one in London - which he visited every year - Europe, the US and even Australia. He was a regular, much-loved and highly respected attendant at annual gatherings of Africana librarians and suppliers in places like New Orleans, San Francisco and Chicago.

In August 2007 Fryde was diagnosed with colon cancer and given six months to live.

He continued coming to the shop, stomping up the stairs if the lift had broken down, until two weeks before his death.