Justice minister lashes out at deadly handovers to Zimbabwe 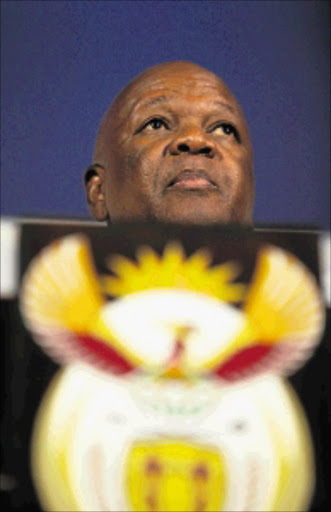 JUSTICE Minister Jeff Radebe is demanding answers on the Hawks having allegedly conducted illegal "renditions" of people from South Africa to Zimbabwe.

And, in a move that puts him on a collision course with his cabinet colleague Nathi Mthethwa, the Minister of Police, he said the renditions "fly in the face of our constitution and its values".

Radebe's comments follow an exposé in the Sunday Times two weeks ago on investigators from the crime-fighting unit sending several Zimbabweans to their death in that country.

Radebe will now demand answers from the government's justice cluster to "map a way forward" .

Radebe said the rendition claims were "very worrying" - particularly as the allegations "were levelled not only against organs of state, but ones responsible for law enforcement and security".

A rendition is the illegal detention of a person for the purpose of delivering them to the security forces of his or her own country.

This week more cases surfaced in which the Hawks and members of the SA National Defence Force were accused of arresting people and handing them to Zimbabwean police - and where those handed over were murdered or tortured.

The actions flout the Immigration Act and also breach a government moratorium on deportations to Zimbabwe and the United Nations Convention Against Torture, which South Africa ratified in 1998.

However, Mthethwa on Friday told the Sunday Times "there is nothing in front of [me]" to warrant an investigation. He said the rendition claims involving the Hawks were "baseless and imaginative".

This is despite a paper trail, published in the Sunday Times, confirming that a number of individuals were arrested as "illegal immigrants" by the Hawks and taken over the border at Beit Bridge, where they were handed to Zimbabwean police.

Hawks boss General Anwa Dramat confirmed in that report that the unit had "deported" three individuals - Witness Ndeya, Gordon Dube and Pritchard Tshuma - but said this was done "properly".

Ndeya died in police custody of "multiple gun shot wounds" in Bulawayo on November 2 last year - two weeks after his arrest in South Africa - according to his death certificate. Tshuma and Dube are believed to have met a similar fate.

Now details of other cases have emerged. In one, John Nyoni, 33, was arrested on January 26 this year by the Hawks and "deported" .

His bullet-riddled body was recovered in a Bulawayo mortuary on February 20.

Nyoni's wife, who lives in Diepkloof, Soweto, described this week how the Hawks had arrested him.

In another case Gift Nhadzi, a former organiser for Zimbabwe's opposition Movement for Democratic Change, detailed how he was arrested by members of the SANDF who handed him to plain-clothes Zimbabwean police officers. He was tortured in front of villagers.

"While they were torturing me they said 'this is how a sellout and a terrorist is treated'," he said. "My wife was four months' pregnant and they said they wanted to skin her alive because there is a sellout living in her womb."

He said they beat her swollen belly. She thereafter suffered a miscarriage. Nhadzi has since escaped back to South Africa.

Dramat's spokesman, McIntosh Polela, this week again denied that the deportations were "renditions".

He said the individuals were handed to immigration officers, contradicting eyewitness testimony and sworn statements from numerous sources.

When the story initially broke, Polela released a statement incorrectly saying that Dramat "never spoke to the Sunday Times".

However, in a recorded conversation, Dramat confirmed that, if renditions were taking place, those involved would be investigated. "Nobody in any units under my command is indemnified," he said.

The law forbids the deportation of people to countries where they face torture or death. Dramat said of this: "We are not aware of what happened to them in Zimbabwe. "

The SA Human Rights Commission said it would "engage" the Hawks and called on the government to investigate. - The names of the reporters are withheld for their safety