Kids full of beans in this playground 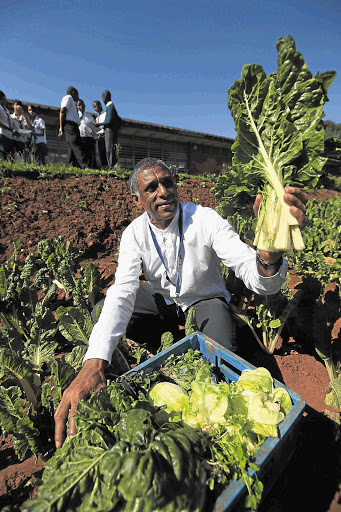 Nanda Nair, principal at Strelitzia Secondary School, who has started a vegetable garden to help the community and the school Picture: JACKIE CLAUSEN

THE principal of a cash-strapped KwaZulu-Natal school is using the fat of the land to feed his pupils and the surrounding neighbourhood.

A year ago Nanda Nair of Strelitzia Secondary in Isipingo, Durban, used R5000 of his own money and donations from neighbours to buy seeds and equipment to plant vegetables on unused patches of land at the school.

Today the produce grown at Strelitzia is sold to raise funds and feed some of the school's 1200 pupils.

Spinach, beetroot, green beans, chillies, mint, peppers and brinjals are sold in the neighbourhood, and to the local Isipingo market and Albert Luthuli Hospital if there is surplus stock.

Depending on the harvest, a bunch of vegetables costs R5. Pupils buying produce for their homes get a R3 discount. Those from indigent homes are given supplies for free.

Said Nair: "The satisfaction of growing things is that we are nurturing the environment, nurturing scarce resources and we are re-establishing our contact with the earth."

One Grade 10 pupil who receives produce every week lives with her mother and two brothers. The family survives on the social grants it receives every month.

Her mother has been unemployed for two years. Her younger brother is still at school and her elder sibling - who has a university education - is unemployed.

"My mother is very happy because she knows that we can keep eating fresh vegetables. It really helps because we can cook one bunch of vegetables for two meals," she said.

The initiative - which now has two part-time gardeners - also supplies three pre-schools, a spiritual centre, Brahma Kumaris, and the Chatsworth Hospice. Each gets its deliveries for free.

The director of Brahma Kumaris, Usha Jevan, said the project fitted in with the centre's philosophy of simple, independent living that encouraged members to grow their own food.

Nair said each month the school generated about R800 from sales, adding that the lack of bureaucracy helped in its success.

"All this has been done without any help of the state. It's not about the talking, it's about the doing."

"We're putting up benches for the children and upgrading the ablution facilities," said Arjoon.