Revolution needed to save our planet 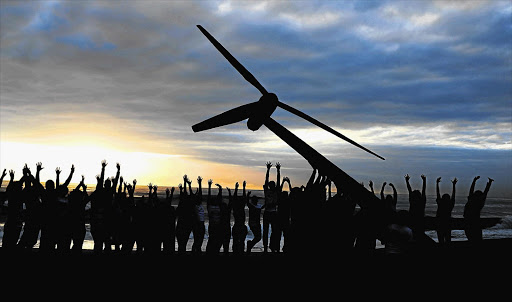 With more than 7billion people on the planet, the rush is on to save the human race from destroying itself.

Today, the eyes of the world will be focused on Durban as thousands of politicians, scientists and eco-activists strive to come up with ways to combat the devastating effects of climate change at COP17.

Warning that the poor would be the worst affected by continued global warming, Deputy President Kgalema Motlanthe yesterday called for the global leaders, representing 195 countries, gathered in the city to cooperate to ensure agreements on the way forward.

"The mitigation of climate change has to be cooperative; there must be agreement between countries on what is to be done," Motlanthe said. "Our way of life is slowly cutting away our oxygen supply as we deplete forests, contaminate rivers and oceans, and pollute the environment without paying due regard to the negative impact [of] greenhouse emissions.''

Acknowledging that the international debate on tackling climate change was ''highly complex and contested'', Motlanthe said ways had to be found to balance the need to reduce emissions with economic growth, ''especially for developing countries".

Christiana Figueres, the UN's top official for climate change, said yesterday that new research and findings were "sounding alarm bells" for urgent action to halt global warming. Figueres said there were two important backdrops to the next fortnight's negotiations.

"The first has to do with a growing momentum for action. The other is the new research and the findings that are sounding alarm bells for urgent action."

Figueres said recent studies all warned of rising danger levels. These included reports by the World Meteorological Organisation, the Intergovernmental Panel on Climate Change, the International Energy Agency and the UN Environment Programme.

"The World Meteorological Organisation has put out a report that the atmosphere has reached record levels of greenhouse gases.

"The Intergovernmental Panel on Climate Change just adopted . its report on extreme weather events, and it has concluded that hot days are becoming hotter and will occur more often," she said.

On the Kyoto Protocol - which commits most developed countries to binding targets on greenhouse gas emissions - Figueres said governments had come to COP17 "fully aware" of the importance of the protocol and its expiry at the end of next year. "I believe that there will be a very serious effort here in Durban to move into a second commitment period," she said.

But she conceded that it was a "tall order" for governments to face this issue, carried over from last year's Cancun negotiations, and from Copenhagen the year before.

Both the US and China - the word's biggest producer of greenhouse gases - refused to ratify the Kyoto Protocol.

Archbishop Desmond Tutu yesterday slammed the wealthier nations for their stance. "Lives of the people cannot be put at risk by those chasing wealth. For your own sake, come on the right side and do the right thing to reduce emissions," he said.

Figueres said finding a solution to climate change required "nothing short of the most compelling energy, industrial and behavioural revolution that humanity has ever seen".

Asked whether she thought the Durban conference could defer a decision on a second commitment period for the Kyoto Protocol, Figueres replied: "In principle, they could do that, but I don't see any interest in doing that."

Many observers believe that COP17 is unlikely to agree on a second commitment period and that laying a foundation for such an agreement would be a more likely outcome. Scientists warn that a delay would make restricting global warming to an average 2C extremely difficult, if not impossible. Anything higher than two degrees is likely to cause extreme changes to the world's weather patterns.

Environment Minister Edna Molewa warned last week that a "low level" of ambition among countries to reduce their emissions could lead to world temperatures soaring.