Thanks to God and Nevirapine 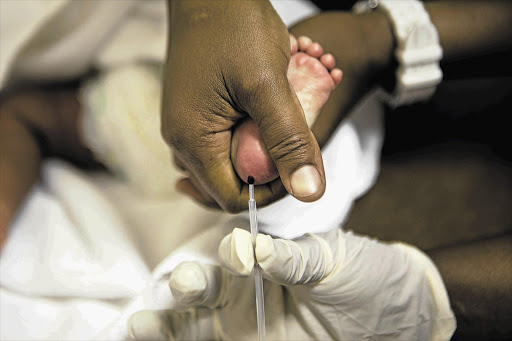 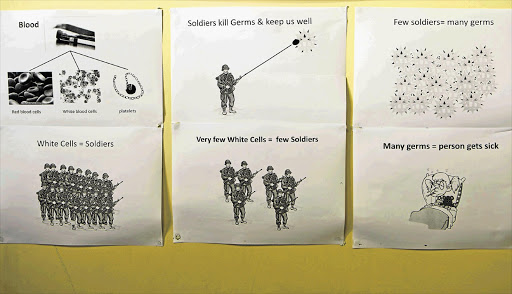 Twelve hours of excruciating labour pains were more endurable for HIV-positive Patricia than living with the anguish of wondering whether she had passed on her virus to her newborn baby.

Queueing anxiously at the Right to Care HIV Clinic in Alexandra, Johannesburg, for her daughter's HIV test results, Patricia tapped her knees and clutched at sleeping Buhle, who was wearing a fluffy pink babygro and wrapped in a furry blanket.

HIV counsellor Lebogang Molubi finally gave her the answer she had been desperately waiting to hear: "Your child is HIV-negative."

That was on Thursday last week, a week before World Aids Day.

She broke into a massive smile as the tension visibly drained from her body.

A week earlier, Patricia had to hold wailing Buhle on a clinic bed while a nurse pricked the sole of her daughter's tiny foot and squeezed out three large drops of blood.

Back at home, the 26-year-old woman told her mother that her newest grandchild was free of the virus.

Her mother screamed, clapped and raised her hands, weeping: "Oh my God! Ndiyabulela! Thixo ndiyabulela" (I thank you! God, I thank you)."

She then wrapped her large frame around her slender daughter's body.

It had been a pensive morning for Patricia. The start of the 7am news reminded her to give Buhle her 1.5ml dose of Nevirapine. Thereafter, as she does every day, she took her own dose of antiretrovirals.

She poured a kettle of hot water into a white plastic tub balanced on a bucket in her bedroom and tested the temperature of her child's bath with her elbow.

The TV newsreader in the background reported: "South Africa has the highest number of people living with HIV - 5.6million."

Patricia set about bathing her baby, trying to ignore the possibility that her child would become one of the statistics.

The Times first met Patricia in May when she was four months' pregnant.

Nine years ago, her HIV-positive sister had a baby who died at six months of Aids-related pneumonia and diarrhoea.

Thanks to the free availability of Nevirapine in the post-Thabo Mbeki era, her sister's two subsequent children are both HIV-negative.

The pressure was on for Patricia, who found out she was HIV-positive three years ago, to fulfil her family's expectations and have a child.

She was determined not to miss a single day of treatment.

Daily, before taking a taxi to the computer repair company where she works as a technician, Patricia drew on eyebrows and swallowed her pills with fruit juice to disguise the bitter taste, continually reminding herself of how important the treatment was.

"I didn't want to put my child in trouble," she said.

Her colleagues were supportive. One lent her a book on pregnancy. The bump under her blue uniform grew.

"My family, all of them, know I'm HIV-positive, and also my boyfriend, he knows.

"I'm happy because I've got no problem because all of these people know that I'm HIV-positive.

"It's not a problem . Some of the people, they do not want to use your spoon if you are HIV-positive. But my sisters and my brothers they can take my spoon and eat."

Family, colleagues and friends loom large in her life.

Not so the father of the baby, who lives and works far away.

Patricia and her friend share antiretroviral drugs, borrowing from each other if they run out and have not collected more from the clinic. They return them as soon as they have more.

A week after her due date, Patricia, who was on maternity leave, was still selling Coke in polystyrene cups outside the Apostolic Church.

And when her labour finally began, on October 12, there was no question of her boyfriend holding her hand. He was working, but he would not have been allowed into the maternity ward run with precision by fiercely territorial nurses.

After several trips to the clinic, Buhle was born two days later in the maternity ward of Charlotte Maxeke Academic Hospital, to which her mother had been transferred with labour complications.

A short while later, Patricia spoke of how Buhle, who weighed 3kg at birth, would be her last child.

"[It] was so very difficult. And I'm not going to have a baby again. I've learned a lesson," she said.

In accordance with the Department of Health's HIV treatment protocols, Patricia was given a dose of Nevirapine during labour to reduce her viral load.

Immediately after her birth, Buhle was given a dose of the same drug - the first thing she had consumed outside her mother's body.

But it was largely thanks to her mother's commitment to her antiretroviral treatment that the little girl can now live HIV-free.

"Ndiyajabula (I am so happy). It's only going to be one of us on treatment," Patricia said with pride in her eyes, gazing at the sleeping bundle in her arms.