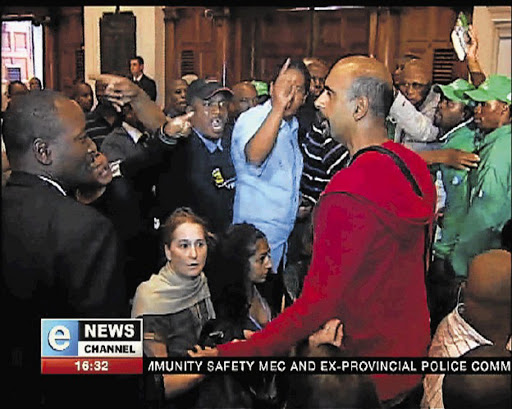 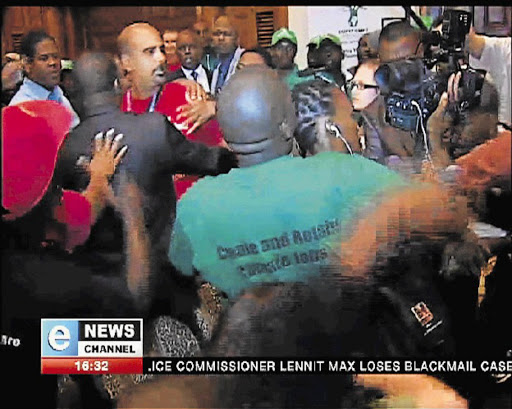 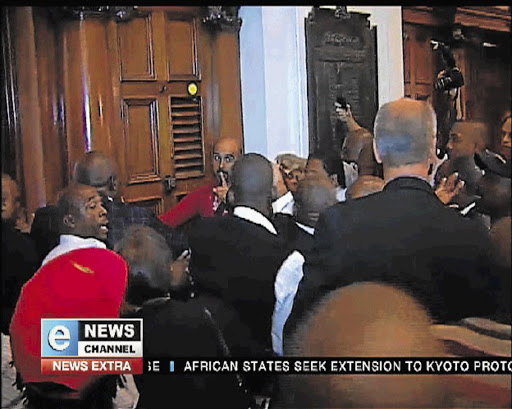 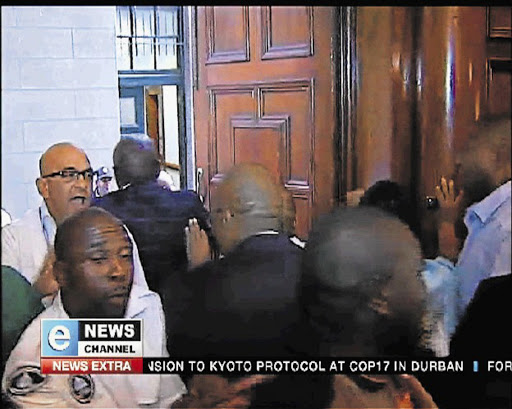 ''Volunteers'' employed by the city of Durban at COP17 yesterday slapped and kicked environmental activists who confronted President Jacob Zuma for not standing up for Africa at the climate change talks.

The heavy-handed actions of the "green bombers" - so called by activists because of their green uniforms and aggression - and of unionists, who kicked an activist, were in full view of the world's media.

After Zuma had told the activists at a report-back session in the Durban City Hall that he felt that it was necessary for him to interact with civil society, pandemonium broke out when placards calling on him to "ditch Europe and the US" and not "let Africa fry" were held up.

The volunteers and Zuma's bodyguards pulled the placards from the activists and tore them up.

When the activists demanded that they be allowed to hold up their placards as part of their interaction with Zuma, the volunteers pushed and slapped them while trying to throw them out of the hall. A group of people, wearing SA Municipal Workers' Union T-shirts, then started singing in support of Zuma.

Zuma did not intervene in the scuffle but had a clear view of the assault on local climate activist Rehad Desai, who was slapped by a volunteer and then pushed to the ground when he called for the president to stand up for Africa.

After Desai fell, the unionists formed a ring around him and kicked him as they sang.

Moe Shaik, the head of the Secret Service, and Cosatu's KwaZulu-Natal secretary, Zet Luzipho, tried to stop the chaos by pushing the volunteers away but the group continued to kick Desai.

Desai and several other activists were thrown out but the volunteers, who started the trouble, remained. No arrests were made.

The meeting continued with Zuma denouncing the chaos as "uncalled for".

"I don't agree with people who disrupt and loot in the name of democracy," he said. "We must tolerate other people's views."

But the activists slammed Zuma, saying he did nothing to protect their rights.

"He just sat there and did nothing. It happened right in front of him," Siziwe Khanyile, of South African environmental group Groundwork, said.

Desai said he was kicked for raising his concerns about speculation that Zuma was planning to side with the EU during the climate negotiations.

He said he had it on good authority that the ''green bombers'' were members of the ANC Youth League, employed by outgoing Durban city manager Mike Sutcliffe to intimidate activists at COP17.

eThekwini municipal spokesman Thabo Mofokeng confirmed that COP17 volunteers were hired and paid by the city, but he rubbished claims that they were told to intimidate activists.

Sutcliffe said the volunteers did not initiate the scuffle.

"The meeting, which was progressing positively, was interrupted by a small group of protestors who chose the opportunity to attempt to disrupt proceedings by raising posters while their own representatives were engaging with the president.

"After a few minutes of disruption, members of the audience tried to get the protestors to take down their posters and allow the proceedings to continue. The situation escalated and a scuffle broke out between protestors and the audience. Security, both SAPS and municipal, became involved and then a few COP17 volunteers, who were standing close by, were drawn into the fray," he said.

The secretary of the ANC Youth League's eThekwini region, Vukani Ndlovu, dismissed the suggestion that the volunteers were recruited from the league, saying they were "just youth".