Big-bucks Benni will not kiss and make up 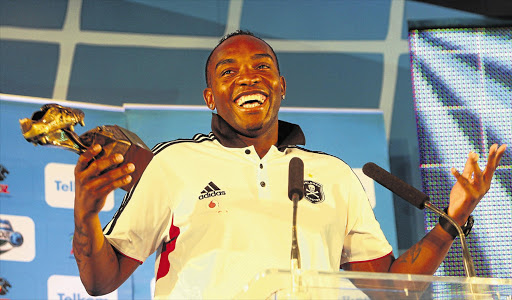 Benni McCarthy of Orlando Pirates shows off a trophy for his goal-scoring efforts in the Telkom Knockout at the Wanderers club in Johannesburg yesterday. McCarthy says the Buccaneers need to shift the focus on the league Picture: SYDNEY SESHIBEDI

McCarthy, who won the Telkom Knockout striker's award and the R100000 prize money to go with it, said yesterday he wasn't yet ready to put behind him the touchline confrontation he had with Wits coaches Roger de Sa and Eric Tinkler on Saturday night.

"Eric Tinkler and Roger de Sa are dead to me," he said. "I haven't spoken to them since and I don't intend to do so. They are non-existent in my life and I am pretty sure I don't exist in theirs, too. I am a Scorpio, and I can be a nice guy, but I certainly won't forget."

The Buccaneers forward claimed De Sa and Tinkler disrespected him at the Moses Mabhida stadium in Durban during and after the cup final on Saturday - which Pirates won by beating Wits 3-1.

While McCarthy is in no mood to let bygones be bygones, Tinkler said his former Bafana teammate had blown the incident out of proportion.

"These things happen in football and tempers flare. But once you go off the pitch you forget about it. I had forgotten about it until I read about it in the papers," Tinkler was quoted as saying this week.

"He also didn't have to take it to that level. That was unnecessary," Tinkler said, commenting about McCarthy's remarks that he had won more medals than Tinkler and De Sa combined.

Tinkler, who was the hard man in the Bafana team that won the Nations Cup in 1996, might be ready to shake hands with McCarthy next time he sees him. But as far as McCarthy is concerned, pigs would have to fly before the two kissed and made up.

McCarthy also explained why he lost his cool with Clever Boys' goal ace Ryan Chapman at the end of the cup final.

"He's a young lad and a nice guy, one for the future. But he was being disrespectful with his goal celebration [Chapman used a sign as if he was crushing the Pirates' bones after scoring in Wits' 3-1 victory in a league match] and we had to address that," said McCarthy.

He said the Buccaneers had to get back to their "bread and butter" in the Absa Premiership this weekend and sweep the emotions of the cup final under the carpet.

"We take on Bloemfontein Celtic at home this weekend and it's going to be hell, especially with the great support they have in their home town," he said.

It was important that they defend their league title this season, McCarthy said.

"We are in a good stride and hopefully we can continue from this. A clean sweep in the league and African Champions League is possible, but we could also fail to win everything. The team can't afford to drop any more points in the league," he said.