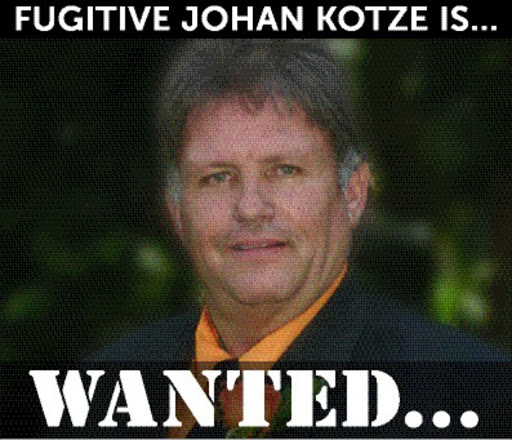 WANTED fugitive Johan Kotze, the man police suspect masterminded the gruesome assault of his estranged wife and murder of her son, has left a trail of destruction, broken friendships and hatred behind him wherever he has gone.

Yesterday police were continuing their nationwide search for Kotze, 50. H e fled the small Limpopo town of Modimolle on Tuesday.

His estranged wife, who cannot be named, was brutally assaulted and tortured, allegedly by three men acting on Kotze's orders.

He then allegedly lured her son to the house where the 19-year-old student was executed.

The woman, who yesterday morning gave the Sunday Times permission to use her estranged husband's name and picture in the hope he would be found, is recovering from her extensive injuries.

Her first husband and the father of the slain student said his ex-wife had suffered immense pain and trauma.

He said she told him Kotze phoned her on Tuesday afternoon and invited her to his house to discuss their divorce.

"He told her there were boxes in the garage of stuff that belonged to her, then had three men who worked with him put a sack over her head, and tied her hands with rope.

"They dragged her into the house and tied her to the bed. He ordered the men to rape her and cut her breasts," he said.

He said Kotze then phoned his stepson from the mother's cellphone, asking him to come to his house.

''His mother told me that our son begged him not to shoot him. He said to him, 'Oom, please don't shoot me.'"

On Wednesday, he had the grim task of identifying his son's body. ''I went to the mortuary and looked at where he was shot. He was shot in the chest and the back of the head," he said.

''I don't know why he did what he did. I think it was out of revenge. He wanted to rule people, '' he said.

Kotze is originally from Prieska in the Northern Cape, where acquaintances had no kind words for the man they once called "MacGyver".

Kotze was given the nickname - after a 1980s television character with a knack for escaping any situation - because he was seen as a ''slippery" character.

Hennie Strauss, who knew Kotze when he moved with his adoptive parents to Prieska in the early 1980s from Namibia, described Kotze as a ''difficult, aggressive man".

Kotze farmed sheep and buck on a farm called Fonteintjie. He also served as the town's sheriff and his intimidating, aggressive approach to people with debt problems made him a "hated" figure.

Residents still speak about an incident when Kotze shot and killed a 60-year-old woman on a farm in 1993 while looking for her son. He was acquitted of murder.

Strauss said: ''I can't say he had any friends because he was just always unlikeable. He was always a difficult man."

A former neighbour said he had known Kotze since he was a young man. ''I wouldn't want him as a friend. He went around town threatening people, always looking for ways to make quick money and getting into fights.

''The men in this town hated him. We all called him MacGyver, he was a slippery guy. He also didn't get along with his father [who died years ago]. When he left for Bloemfontein we were just too happy to see him go."

Kotze bought shares in a farm near Jagersfontein in the Free State after leaving Prieska.

This deal ended in drama when a court ordered him to return 366 sheep to the farm's owners after it went on auction and the owners feared their sheep, worth almost R500000, would also be auctioned off.

In Modimolle, a local businesswoman said she first met Kotze about two years ago.

''He is one of those people who always talks about himself and how rich and mighty and powerful he is.

"I must be honest, we are all scared of him," she said.

A friend of Kotze's estranged wife, who he married in October 2010, said she spoke to her on Friday. "She is in a lot of pain and traumatised. I don't know if she will ever recover."

Kotze, who is understood to have been married three times before, and his current wife became estranged just four months after their wedding.

''He's a very intelligent person and he removed the tracker from the vehicle. I'm confident he will be arrested soon."