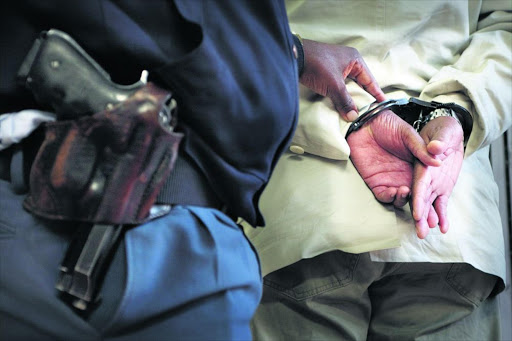 A suspect is handcuffed by the police. File photo.
Image: DANIEL BORN

"Today we have arrested three people on charges of public violence. For now people are still blockading the road... we are monitoring the situation," said Sergeant Mmako Mophiring.

Mophiring said the civil unrest started on Friday evening when about a hundred community members from the Kgubetswana township near Clarens started blockading roads with rocks and burning tyres.

"They totally closed and barricaded the road with burning tyres and huge stones on the R711 between Clarens and Fouriesburg," he said.

Police and public vehicles on the affected road were pelted with stones and damaged.

"We managed to assist a kombi and a bus that were carrying members of the public to the ANC's centenary celebrations in Bloemfontein," he said.

Mophiring said the protesters were still on the road on Sunday afternoon.

"For now they are still there and we need to diffuse the situation...they are just blocking the road."

Mophiring said the protest was seemingly caused by a lack of communication from the local municipality.

"A group that one would say is not more than 100 people who started this [protest] had their own issues with [the] local municipality. Sometime last month they handed a memorandum to the municipality with given dates for answers. Answers never came forth so that's why they have the problem."