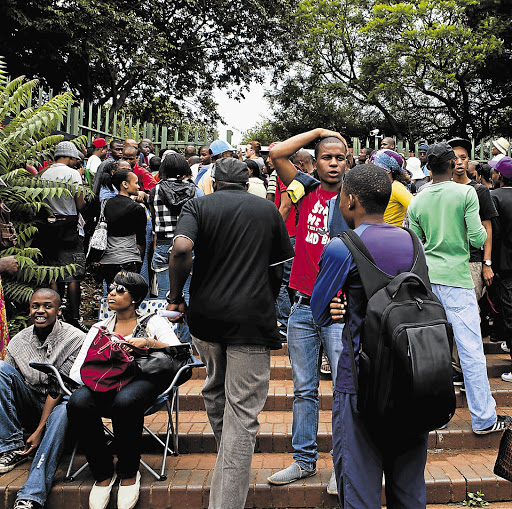 Would-be students at one of the University of Johannesburg's entrances yesterday in the hopes of being allowed to register
Image: BRETT DAVID STEELE

Tens of thousands of young people hungry for a chance at tertiary education will miss out this year - more than 180000 of them will be turned away from the country's nine top universities.

This despite Minister of Higher Education Blade Nzimande promising last year that space would be made for 180000 first-years in 2012.

At the University of Johannesburg alone, about 74000 would-be students will be turned away.

The situation is similar at universities across the country, which would leave about 183000 prospective students without a chance to further their education this year.

Thousands of hopefuls braved the weather from the early hours of yesterday and waited in queues to submit late applications at the University of Johannesburg.

Dumisani Mngomezulu, 20, from Tsakane, on the East Rand, brought his blanket and queued from midnight on Sunday hoping to get a space to study for an accountancy degree.

"Fortunately I managed to submit my application before they started turning people away," he said.

Other students, such as 19-year-old Siboniso Ntombela, travelled all the way from Newcastle, KwaZulu-Natal.

Impatient students forced their way through two entrances at the university's Bunting Road campus yesterday but no major disruptions were reported.

Professor Marie Muller, the university's registrar, said: "The planned intake of first-years is 11000, subject to the number of returning senior students.

"We will therefore register the senior students first [from January 23] followed by the first-year undergraduate registration that begins on January 30. On-line registration will be available on January 16."

Professor Jonathan Jansen, the University of the Free State's rector and vice-chancellor, said the university had 500 fewer first-year places available than last year but the university will intensify its recruitment campaign for next year.

Tshwane University of Technology spokesman Willa de Ruyter said most of the students who registered on time had been admitted and about 1000 places were still available.

Roslyn Baatjies, spokesman for Nelson Mandela Metropolitan University, said close to 4000 applications were still to be finalised and about 2200 applicants had been referred for admissions testing.

Carl Herman, director of admissions at the University of Cape Town, said the university did not accept late applications and no places had been created for this year.

"Many factors have to be considered before a university can increase the number of places - the student-teacher ratio, lecture theatre capacity, the availability of housing, and the capacity of other facilities, such as laboratories, libraries and counselling services," he said.

Doron Isaacs, coordinator of the non-government organisation Equal Education, said: "We know from the experiences of our membership that there are many students being turned away because there aren't sufficient places and it's a source of concern.

"We feel that some institutions are not doing enough to recruit students from township schools," said Isaacs.

Professor Kobus Maree, of the University of Pretoria's educational psychology department, said he was "baffled" as to why several universities are left to deal with long queues every year.

He said young people who queue for admission to a general BA course would receive a better education at a further education and training college, which would equip them to exploit the scarcity of skills in engineering, and the natural and physical sciences.