By CANAAN MDLETSHE and NIVASHNI NAIR 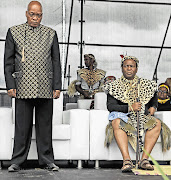 President Jacob Zuma and King Goodwill Zwelithini at Sunday's event in Nquthu, northern KwaZulu-Natal, at which the 133rd anniversary of the Battle of Isandlwana was commemorated. The king has been accused of insulting gays Picture: TEBOGO LETSIE

The SA Human Rights Commission, the Commission for Gender Equality and gay and lesbian advocacy groups are demanding that Zulu monarch King Goodwill Zwelithini retract his criticism of same-sex relationships before it leads to hate crime.

On the same day that Human Rights Watch released its annual report on gay rights in Africa, King Goodwill on Sunday said at the 133rd commemoration of the Battle of Isandlwana that same-sex relationships were "rotten".

"Traditionally, there were no people who engaged in same-sex relationships.

"There was nothing like that and if you do it you must know that you are rotten. I don't care how you feel about it ... same sex is not acceptable," King Goodwill said.

But yesterday, the Zulu Royal Household criticised what it called a "reckless translation" of the king's speech, saying he had merely expressed concern at the moral decay reflected in the prevailing rampant sexual abuse, including the rape of men by other men.

"At no stage did His Majesty condemn gay relations or same-sex relations," said Prince Mbonisi Zulu.

The Human Rights Commission said that it had obtained transcripts of the speech.

"The SA Human Rights Commission is concerned about the homophobic utterances allegedly made by King Goodwill Zwelithini. The commission will be writing to the king to ascertain whether he did, in fact, make such statements and, if he did, to immediately retract them," said commission spokesman Vincent Moaga.

He said due to the growing levels of hate crimes against lesbian, gay, bisexual, transgendered and intersexed people it found "such utterances to be inflammatory".

Nogwaza's face and head were completely disfigured by stoning. She had been stabbed several times with broken glass before she was raped in the attack, which seemed to be motivated by her sexual orientation.

Moaga said: "If it is indeed accurate that his majesty, the Zulu king, made the utterances as reported, they constitute hate speech.

"The king should use his powerful position not to dehumanise and discriminate against certain people on the basis of their sexual orientation but to uphold the constitution and promote tolerance and diversity.

"The commission is also concerned that the king made his utterances in the presence of President Jacob Zuma. The president is entrusted with the defence of SA's constitution and cannot remain silent in the face of such attacks."

However, Zuma arrived at Sunday's event in Nquthu after the king had made his comments.

In his speech, Zuma said South Africa faced "different challenges of reconciliation and building a nation that does not discriminate against other people because of their colour or sexual orientation".

Yesterday, the Commission for Gender Equality said it was concerned that King Goodwill's statements could lead to violence against gay people, and called on him to retract them.

Youth leader of the Durban Lesbian and Gay Community Siphokazi Nombande said the advocacy group would haul the king before the Equality Court if he did not retract his statements.

The SA Gay and Lesbian Alliance Against Defamation said it was distressing for a high-profile person to make "such vexing and degrading comments".

Zuma was at the receiving end of the gay community's anger six years ago when he said same-sex marriages were a "disgrace to the nation and to God" and that he would have beaten up gays when growing up. He later retracted his comments and apologised.

Prince Mbonisi Zulu said yesterday that the main focus of the king's speech was on "the creation of a compassionate society with men protecting the vulnerable members of society, especially the elderly, women and children".

"In the context of rampant sexual abuse, his majesty remarked that during the good olden days our forefathers dedicated their lives for the good of the nation.

"Men would go for months to the battles to fight the enemies without their wives but did not harass each other sexually and there were no cases of rape of women.

"Nowadays you even have men who rape other men. This is a clear sign of moral decay.

''We condemned those involved - no matter who you are," Zulu said.