The Protection of State Information Bill was loudly opposed by members of the Cape Flats public yesterday when it was presented by MPs. 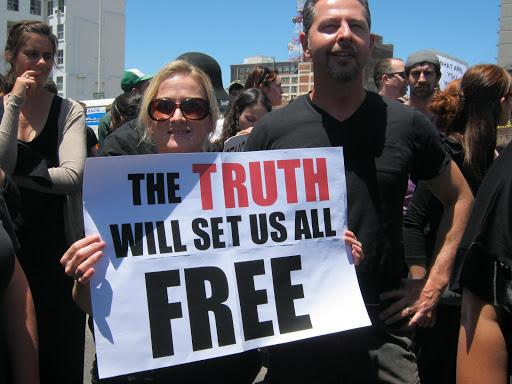 People protest against the secrecy bill outside Parliament in this file photo.
Image: Anna Majavu

During the first day of nationwide public hearings on the bill, which are being conducted by an ad hoc committee of the National Council of Provinces, speaker after speaker slammed the proposed law, saying it was a government attempt to muzzle the media and protect corrupt politicians.

The bill was passed by the National Assembly in November despite strong objections by several political parties, the media and civil society organisations.

Those who objected were against the omission in the bill of a provision for a public interest defence clause for publishing classified information.

Media and other lobby groups fear that the government wants to use the bill to clamp down on investigative journalism.

The bill is now being considered by the council for concurrence and parliament's second chamber has decided to conduct public hearings in all nine provinces.

Firing the first salvo in Guguletu was Mlungisi Bleki, a resident of Crossroads settlements.

He said that the processing of the bill was a waste of time and state resources.

"I am not in support of this bill. I see this bill as being an instrument to oppress people who are having nothing and no work. It is taking us backwards to the period of government of suffering - or the apartheid government," he said.

Another resident, Sameliswa Qoka from Delft, shot down the processing of the bill by telling parliament that South Africa needed to debate development in the country and not "secrecy laws".

"I feel that the Protection of State Information Bill, post-1994, is not really needed. South Africa needs to start a conversation about development. When the government starts talking about a bill like this one, we need to worry," said Qoka.

Other residents echoed similar views, telling MPs that they wanted government to provide them with basic services such as running water, electricity and decent sanitation. Their comments frustrated ad hoc committee chairman Papi Tau, who repeatedly asked the audience to stick to matters in the bill and not service-delivery issues.

"Can we put other service-delivery issues, which are equally important, aside for the purpose of this meeting?" Tau pleaded, to deaf ears.

A small section of the Guguletu Sports Complex threw its weight behind the bill, while another crowd continued to voice their vociferous opposition to the law .

Guguletu resident Wilson Sidina, who declared during his submission that he was a member of the ANC's MK Veterans Association, told the hearing that he was fully behind the bill and would defend it with his life.

"We will protect this bill until the end. If there must be a spray of blood, then that shall be like that," said Sidina.

He urged his compatriots to ignore what he called media propaganda on the bill. But Julius Tsotetsi, another Guguletu resident, shouted: "Phantsi Ngalomthetho Phantsi" (down with this law, down).

The public hearings are expected to continue in the Eastern Cape tomorrow.