Six years and about 50 postponements later, and after accusations of shoddy police work and prosecution, the four killers of Zoliswa Nkonyana were finally sentenced. 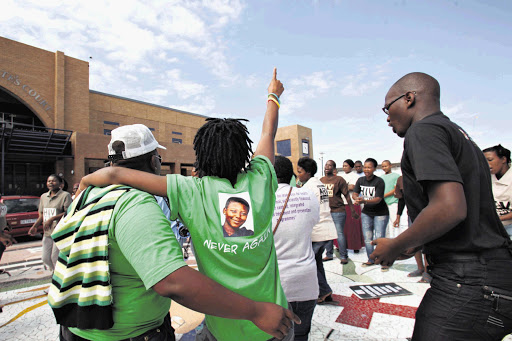 A crowd outside the court in Khayelitsha, Cape Town, yesterday cheers the sentencing of four men who stabbed, clubbed, beaten and kicked lesbian teenager Zoliswa Nkonyana to death in 2006.
Image: SHELLEY CHRISTIANS

In sentencing the men, which lasted 90 minutes, Magistrate Raadiya Whaten said she believed the brutal killing of the 19-year-old lesbian - who was stabbed, beaten, clubbed and kicked to death - was fuelled "by hatred".

In a courtroom packed to capacity for the first time since the trial started, Whaten sentenced Lubabalo Ntlabathi, Sicelo Mase, Luyanda Londzi and Mbulelo Damba to 18 years in jail each for the February 2006 murder.

Four years of each of their sentences were suspended for five years.

Whaten said: "Zoliswa Nkonyana will never return to her family and, justly so, the accused have to pay for what they have done.

"The court will attempt to restore a sense of justice to the community. The message must be clear that violent crime is not acceptable.

"The court has a duty to show that intolerance - be it of race, sex or religion - will not be allowed to go unpunished," she said.

The trial had made international headlines because of the homophobic nature of the attack on Nkonyana and for the inordinate time it has taken for justice to be done.

With a heavy police presence in the Khayelitsha Regional Court, Cape Town, yesterday, Nkonyana's mother and step-father, Noxolo and Gcinumzi Mandindi, sat behind the dock.

When the magistrate finished, there was brief silence in the court, then the activists who had been attending the case began shaking hands and hugging each other. Outside, people cheered, raised their fists and danced.

Nkonyana's mother smiled as she left the courtroom, only to break down when faced by a huge contingent of media. She was taken back into court, while Gcinumzi returned to speak to journalists.

"Zoliswa never chose to be lesbian. She was born that way and we accepted her for who she was," he said.

The only source of comfort for him and his wife, Gcinumzi said, were pictures of Nkonyana and the fond memories they had of the "short time" they spent with her.

The magistrate had told a packed courtroom that the 51kg Nkonyana had posed no threat to the four accused, who were teenagers at the time of the attack.

"Here we are dealing with a young woman who was killed without mercy and not far from her home. I'm talking about a small-framed girl," said Whaten.

"I'm satisfied that the murder of Zoliswa Nkonyana was [fuelled] by hatred; the sequence of events preceding [the murder] confirm that."

The convicted men had entered the dock scanning the court for relatives. As they had before, they asked for money and clothes.

After reading the sentence, Whaten asked the men if they understood their punishment.

They asked for it to be repeated and even then, they showed no visible emotion.

Before being led out of court to the holding cell, they greeted their families a last time before being taken to Pollsmoor Prison.

According to gay and lesbian rights group The Triangle Project: "'[It is] the first time discrimination based on sexual orientation is named as an aggravating factor in [a] South African criminal trial."

Jill Henderson from The Triangle Project said the men's "substantial sentence" sent out a strong message.

Whaten said a report submitted to the court by The Triangle Project detailed the hardships and intolerance experienced by lesbians and gays. She said it was clear the men in the dock had not accepted Nkonyana's choice to be a lesbian and had attacked her.

Eric Ntabazalila, spokesman for the National Prosecution Authority in the Western Cape, said: "It is a very important day for the gay and lesbian people living in the Western Cape and the rest of the country. The court indicated clearly that anybody who commits a hate crime will be severely punished."

Ntabazalila said the men had never shown any remorse for their "heinous" crime and there was a small chance of their being rehabilitated.

Activists from the Treatment Action Campaign, The Triangle Project, the Social Justice Coalition, Free Gender, and Khayelitsha residents celebrated outside court after the sentence was handed down.

TAC activist Lumkile Sizila said: "The sentence has restored our faith in the justice system, but it has been a long walk to the sentence. We are also sensitive to the fact that this is not revenge against the young men as they still need to grow and come back and be part of society."

The four men have 14 days to appeal their conviction and sentences.

Civic organisation the Social Justice Coalition said the case had been characterised by police bungling and failings in the justice system.

"Unless changes are made and the police and criminal justice system improve, families will continue to suffer as the cases of their loved ones drag painfully through the system," the organisation said.