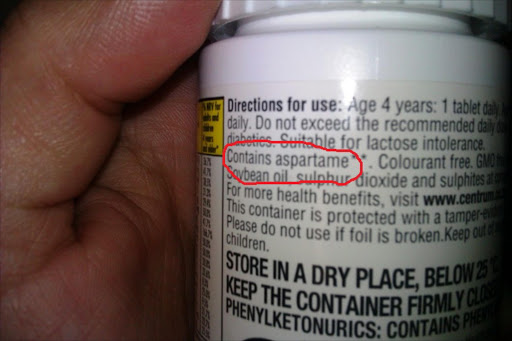 On 1 February 2012 I went to the pharmacy to buy a multivitamin for my 6-year old twins, one of whom has Cerebral Palsy.

After scanning the boxes of many of the vitamins, the pharmacist assisting me recommended the ‘Centrum Kids’ product, saying it was so good and did not contain Aspartame – something that is a very big concern of mine knowing the health issues this (in my experience and opinion) horrible substance causes.

The section detailing the nutritional information on the sealed box says "Phenylketonurics - contains Phenylalanine**" but does not reference where to look for further description and/or explanation on this. The pharmacist told me it was nothing irregular but referred to an allergy some children may/may not have.

Imagine my disgust, anger and horror when I opened the box, was about to give it to my girls and then decided to read the actual little bottle, finding nothing other than Aspartame. In a children's supplement.

My first thought was as to why on earth they would do this. I am no medical professional, but even I know the dangers of this ingredient, having had my children suffer first hand from just one kids yoghurt a day a few years ago (a company that won’t be mentioned as they removed the ingredient and I see no need to slander them in any way) and doctors have warned me to keep my children far away from it post the poisoning that put us through living hell for three weeks and three weeks to detoxify their systems thereafter.

I had a look all over the box and then I saw, on the underside of the box - "sweetener aspartame". The term "Phenylketonurics - contains Phenylalanine" that it related to was a mystery to me. I Googled that and would you believe that is the really complicated way of saying "Contains Aspartame". Money wasted, and feeling like I had just averted disaster, I was furious.

I posted a comment to this effect on Centrum’s Facebook Page, stating that I wouldn't even give it to a child on the street. That doing this would make me a terrible person. I said that I would never buy another item and would be taking all my friends and family with me.

I emailed my children's school and every school teacher I know. Every single friend with a child. I warned them about the inclusion of Aspartame.

I attached photos of both the box and the bottle that I took myself.

I advised all and sundry to Google "Aspartame" themselves to see what I was on about. To read up about the side-effects mentioned on both medical sites and those who had already suffered them. 92 horrible symptoms.

Here are links to some local sites I provided:

and there are hundreds like this internationally, one being:

I advised that they speak to their doctors and have their children tested before even considering the product.

I called Pfizer and lodged a complaint. I called a few times because I wasn’t contacted back and demanded that they explain themselves. Xylitol and Sucrose are already included. Aspartame is a dangerous and controversial artificial sweetener.

I wanted to know, as a concerned parent, as a citizen, as a consumer, why Aspartame, of all things, had been included. There have been court cases relating to this ingredient.

The hazards of this product are also fully detailed on the National Health Federation’s website:

If you’re wondering who they are, in their own words:

“Established in 1955, the National Health Federation is an international non-profit, consumer-education, health-freedom organisation working to protect individuals' rights to choose to consume healthy food, take supplements, and use alternative therapies without government restrictions.

“With consumer members all over the world, and a Board of Governors and Advisory Board containing representatives from 7 different countries, the Federation is unique as being not only the World's oldest health-freedom organization for consumers but the only one accredited by Codex to attend and speak out at meetings of the Codex Alimentarius Commission, the highest international body on food standards.”

If you search for ‘Aspartame’ on their site you will see the articles that come back.

‘Centrum Kids’ is recommended (and I quote) "for children four years and older".

I emailed every children’s magazine I could Google. I have been posting on the Facebook walls of 702 and SHOUT.

Since then, it seems I've caused a stir within Pfizer - both here and in the US.

The following day I received a call from one of the qualified representatives. She's very concerned by my wall post on their US-based Facebook Page, all my other posts, as well as what was being posted by others now too, having seen my posts. She had apparently been contacted by the US regarding my post.

A big debate regarding Aspartame ensued. She told me I had no right to say what I said - I told her that as a parent and a consumer it is within my legal rights to defend my children and look out for the well-being of other children. That unless they are prepared to reveal their medical composition or what it is based on medically, we as parents are entitled to challenge product ingredients. It is, after all, our consumer right. Sections 22, 24 and 41 of the Consumer Protection Act allow for the action I took.

She then suggested that because I posted on the US site, she would have to speak with the US legal department and find out how they would be handling my comment and action. I told her that they were welcome to contact me. I know my rights.

I stated that there is simply nothing positive on the internet regarding this product, some posted by doctors and other medical professionals. I told her that when your own doctor and other health professionals warn you to stay away from this ingredient, the inclusion of this ingredient must be questioned and challenged. She cautioned me to be wary of what I read.

Then the story changed. I was told that I would be refunded for my purchase and data would be sent to me regarding the product and specifically, the Aspartame inclusion, but that they could not provide full composition breakdown as this would reveal their formula to their competitors, which I understand completely.

She agreed with me that 1) not enough information regarding how Aspartame's inclusion can affect a child and why it would, and that this must be addressed, specifically with regards to a possible allergic reaction 2) that warnings should be put on the packaging and/or on their site perhaps cautioning parents to first test their children for an allergy to Aspartame before purchasing the product 3) that perhaps an informational brochure should be considered.

She indicated she would speak to the key parties within Pfizer regarding this. I also questioned her as to why the ‘Centrum Kids’ product being sold in Australia contained Saccharin instead of Aspartame. It doesn’t make financial sense that a product would be altered for (what seems to be) one country, only. She assured me she would revert to me regarding this.

Saccharin is considered to be the safest of all artificial sweeteners.

Well, I waited. I received nothing via email. I did receive a call from her explaining the composition breakdown, and how according to the FDA (US Food and Drug Association) and the EFSA (European Food Safety Authority) the use of Aspartame was deemed safe and the levels they used more so.

These are the same authorities that, based on documented cases, have changed their opinions before and had quite a bleak outlook on Aspartame a few years ago.

I will not reveal the composition provided to me by the representative of Pfizer. If you need this you are welcome to contact them and ask for it. I am sure that it is confidential, and I do not wish to hurt Pfizer. I need to make it clear that my story, as detailed thus far, and as it progresses hereafter, is not intended as a smear campaign against Pfizer. I wish them no ill will.

Yesterday I received a call from her. She made arrangements with me to refund me today. I will be going to their offices shortly to collect my refund in person. She didn’t seem to happy to speak to me, and when I questioned her again regarding the “why” of Aspartame’s use and the outcome of the discussions we’d had regarding proper literature for parents on the product, she stated that it was only to make the product more palatable as some vitamins are quite bitter, and that she did not want to say too much to me or she felt sure she would no doubt find the discussion on Facebook later.

I queried the Australian product composition and she said that she was still waiting to hear back from them.

I am appealing to yourself, esteemed Editor, and every member of the public: please educate yourselves. Please speak with your doctor and/or other health professionals. Please test your children for sensitivity to Phenylalanine.

To me it seems ridiculous that we would have to go that route and incur that cost, but what choice do we have? I’m sure that as a mere mom I cannot make Pfizer reconsider their product composition, or make them disclose more information to the public, but I can make sure that every parent is aware. I can lean on my consumer rights, invoke the responsibility of those rights, and ask questions.

I would never forgive myself if another child is suffering / does suffer because of this ingredient and I kept silent on the matter.

There are so many court cases documented on the internet of where Pfizer has been wrong before. Cases relating to medication causing cancer, causing birth defects and birth control medication that left women pregnant instead. I do not speak out of turn. It’s all there, case numbers, dates, complainants and such. How the matters were settled by Pfizer.

What if they are wrong? What if, in a few years from now, our children who are not immediately outwardly reacting, develop conditions? Where do we turn to then?

If, as a parent, you decide that it is in your child’s best interest to still purchase this product, having all the information, with or without testing them beforehand, then that is your right. I won’t be accused of telling anyone what to do, and that is certainly not my intention.

To my knowledge, there are no documented white papers detailing the effects on children from different countries and of different races, having taken the product over an extended period of however many years and regularly tested to see the effects and their wellbeing. Until that sort of data is provided, I choose to give the product a skip.

I must reiterate that this is not intended a smear campaign. For this reason, I have not revealed the names of the representatives I have spoken with. They are only doing their jobs.

As a mother, as a citizen and as a consumer, I stand for everyone in South Africa by documenting this.

Those little people that you’ve brought into this world are so precious. They are, quite rightly, our future. If we don’t look out for them, who will?