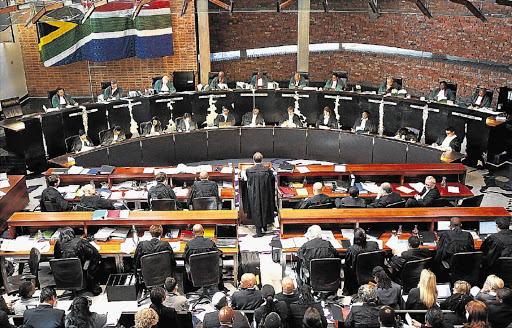 The General Council of the Bar of SA has filed an application for leave to appeal to the Supreme Court of Appeal in a dispute about who may confer the status of senior counsel (awarding of silk) on a practising advocate.

The council's chairman, Gerrit Pretorius, said yesterday that a notice of appeal had also been filed in the Constitutional Court.

An appeal to the Supreme Court of Appeal would be conditional on the Constitutional Court declining to consider a direct appeal, he said.

The Pretoria High Court found earlier this month that the president had no power to confer the senior status on practising advocates in terms of the constitution.

Ruling in favour of Sandton advocate Roshnee Mansingh, Judge Legodi Phatudi found against the president and the justice minister.

They had both opposed the application, along with the council, the Johannesburg Society of Advocates and the Independent Association of Advocates.

Phatudi said he did not agree with the argument made on behalf of the council that the prerogatives of monarchs and former state presidents were codified in the constitution.

"The drafters' thought of having a break with the past is, in my view, an avoidance of adopting concepts into the constitution which are not based on the will of the people of South Africa," he said.

He ruled that the phrase "conferring honours" could not mean any act by the president that resulted in an individual being accorded an honour he had not earned.

Phatudi held that an honour was awarded for exceptional and distinguished contributions in community service.

None of the respondents could persuade him that the conferral of senior counsel status was indeed an honour, he said.

"It is clear that the [police officers] who have been honoured by being awarded the Soccer World Cup 2010 Support Medal did not apply to be so honoured.

"On that basis, I am of the view that an honour is earned while serving the country exceptionally beyond the ordinary call of the day," he said.

Pretorius said members of the constituent bars of the general council applied for silk once a year.