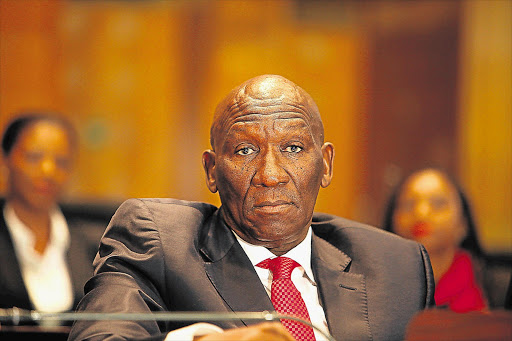 The first day of the Bheki Cele inquiry laid bare major holes in the testimony of the state's star witness yesterday when it was revealed that the controversial R1.67-billion police headquarters deal was fast-tracked on the basis of assumptions and not instructions.

General Hamilton Hlela - who headed the police's supply chain division - was a crucial contributor to Public Protector Thuli Madonsela's damning reports into the lease deals. The reports led to President Jacob Zuma's suspending Cele and establishing the board of inquiry.

Yesterday, however, Hlela fumbled while testifying before the chairman of the inquiry, Judge Jake Moloi. He conceded that he omitted crucial details when speaking to Madonsela's and the Department of Public Works' investigators. It was under cross-examination by Cele's advocate, Vincent Maleka SC, that Hlela made this admission.

Until yesterday, Hlela was an unlikely hero in exposing the wasteful expenditure of state funds.

Hlela revealed that he made certain procurement decisions regarding the lease deals involving the Middestad building in Pretoria and the Transnet building in Durban on the assumption that Cele wanted to lease those specific buildings.

Not once, according to Hlela's testimony yesterday, did Cele specifically mention the Middestad building as his preference for housing the police top brass, neither did he instruct Hlela to pursue a negotiated form of procurement, which led to the buildings being leased at inflated rates.

Cele told Hlela only of a building in central Pretoria in which two floors could be leased. Hlela, however, claimed he had not misled Madonsela but merely did not tell her about certain facts.

During a gruelling few hours under Maleka's examination, Hlela - who resigned from the police in 2010, allegedly being forced to do so by Cele - shed some light on what possibly led to the controversial deals being signed with property mogul Roux Shabangu.

Maleka ripped into Hlela's statements - one made to the prosecution team headed by Viwe Notshe and the other to Madonsela.

Hlela had told Madonsela that Cele identified the Middestad building, introduced him to Shabangu and instructed him to fast-track the procurement of the buildings.

Some of the startling admissions Hlela made yesterday:

Hlela, who at the beginning of the proceedings said he did not support the contention that Cele was guilty of corruption, testified that the police had compiled a needs analysis before Cele took office in 2004-2005 and that a public-private partnership project had been registered with the Treasury.

He said that when he took Cele to a site where a new police building could be built, Cele told him he would "much rather build police stations than cushy offices".

Hlela said Cele then told him to look for a new building that would be available in time for the 2010 soccer World Cup to house the police's communications operation.

During a meeting with Shabangu in May 2010, Hlela said it had become clear that the building would not be ready in time for occupation by the communications unit.

He nevertheless fast-tracked an agreement to acquire the building.

Hlela said that, though procurement regulations required him to test the markets to assess prices, he flouted the regulations because Cele had "pointed" that he wanted the building.

Asked why he did not object to Cele's demands, Hlela said: "I couldn't. I didn't. I did not because he wanted the building."