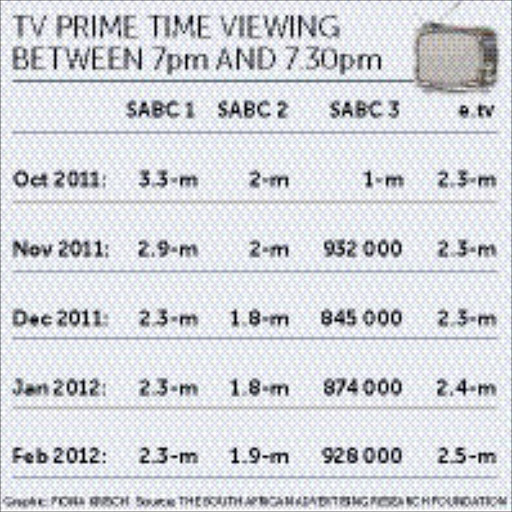 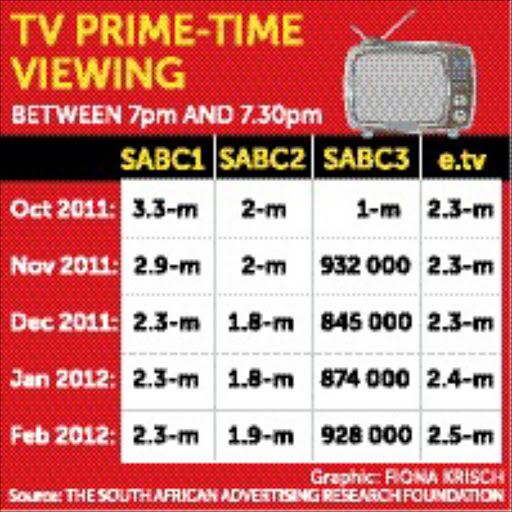 THE SABC has lost over one million viewers across all three channels in the prime-time news slot in the p ast six months, according to audience ratings by the South African Advertising Research Foundation.

Two of the channels, SABC2 and SABC3, flight their news bulletins - in Afrikaans and English - during the 7-7.30pm slot on weekdays.

The figures are in comparison to those released in October last year and also reveal that free-to-air channel e.tv, which airs its news bulletins at the same time, made minor gains.

The figures indicate that:

The public broadcaster's most-watched channel, SABC1, had 2.3 million viewers in the time slot;

SABC2, which flights the Afrikaans news bulletin, pulled an average of 1.9 million, or 6.7%, of the total viewership; and

The SABC1 news bulletin, which alternates between Zulu and Xhosa bulletins at 7.30pm, recorded a loss of more than 500000 viewers, down to 3.1 million.

He said audience figures usually increased around February - although this was not the case this year.

Kganyago attributes this "slight decline" to a changing media landscape.

Media experts attributed the decline to poor content, among other things.

Arthur Goldstuck, MD of World Wide Worx, said the decline was "symptomatic" of what was happening at the SABC "in general".

"When you have a lack of leadership and a lack of vision as a broadcaster, then content must suffer," he said.