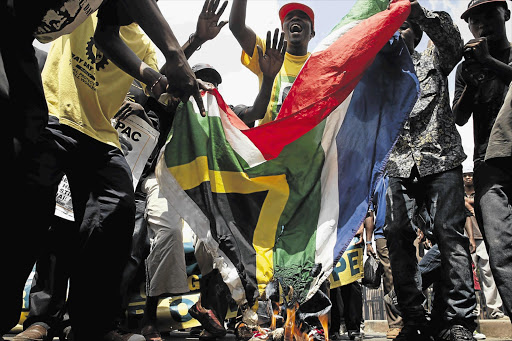 Protesters burn the South African flag in protest of the Human Rights Day commemorations being moved to Soweto from Sharpeville Picture: LEBOHANG MASHILOANE

President Jacob Zuma, regularly punted as the people's president, had to be protected from them yesterday as violent protests - including the burning of the South African flag - broke out in Sharpeville, in the Vaal Triangle.

Yesterday, Human Rights Day became a day of protest in some areas of the country, with residents complaining about lack of service delivery.

Sharpeville - the historic township where at least 69 black South Africans were killed on March 21 1960, when police opened fire on protesters who had gathered to defy apartheid laws - was engulfed in violence again.

Residents were angered when they learned that the official commemoration of the day had been moved to another historic site: Kliptown, in Soweto. The Freedom Charter, the foundation of South Africa's constitution, was launched in Kliptown in 1955.

It was against the backdrop of angry young people burning the South African flag that the heavily guarded Zuma arrived in Soweto.

The picture of the gregarious president in touch with his people was traded for a more distant, but safer one.

"I came here to see Zuma but I will go home without seeing him at all," complained Dorah Mokadi, an unemployed graduate from Soweto.

Shortly after arriving at the venue yesterday morning, Zuma, flanked by his deputy, Kgalema Motlanthe, Justice Minister Jeff Radebe and Gauteng Premier Nomvula Mokonyane, inspected the square's 10 pillars and the Monument to the Freedom Charter before taking his place in the air-conditioned hall.

While Zuma read his speech in the hall, to which only accredited VIPs and the media were admitted, the crowd watched him on TV screens in a tent in a cordoned-off area outside.

In his speech, Zuma highlighted the government's achievements since taking power in 1994. He said the government had expanded the delivery of social services.

He acknowledged the "challenges" ahead but said there were plans to strengthen the economy and create jobs.

"We have done well indeed in a short space of time. However, we are aware that, as more people gain access to these socio-economic rights, many more still live in hardship, due to decades of neglect," he said.

Tefo Morofe, a young entrepreneur from Sharpeville, held a placard that read "ANC, where is your conscience? - Sharpeville 21 March Massacre".

He said that he travelled to Soweto from Sharpeville to voice his anger at the government's decision to move the event, which was held in Sharpeville last year, to Kliptown.

"It is a tradition that, when you hold a ceremony of the ancestors, it should be held at home and not at a neighbour's yard.

"It is a Sharpeville event, not Kliptown. Kliptown is historic because the Freedom Charter was signed here, not because there was a massacre.

"It is now called National Human Rights Day, which we respect, but it has significance because of the Sharpeville massacre. Like June 16, we cannot want it to be moved to other areas because it happened in Soweto," he said.

Norah Mkhize, from Zola, Soweto, said she was "angry" that Zuma did not interact with the people because she was hoping to tell him that she is yet to find closure after her son, aged 19 at the time, was killed by security police in 1986 while protesting against paying rent for a municipal flat in White City.

Several citizens from in and around Johannesburg held placards decrying what they viewed as human rights violations, from poor service delivery to lack of access to housing.

Mokonyane had been scheduled to travel to Sharpeville earlier in the day but her office said the visit had been cancelled because of security concerns.

In Sharpeville, there was no commemoration of the 69 lives lost. Instead, the township reverberated with the residents' anger.

There was a heavy police presence along Seeiso Street, where shops had earlier been looted, and which had been barricaded with litter, bricks and tree stumps. An angry mob marched along the street, singing struggle songs.

In the community hall, PAC leaders made no attempt to soften their contempt for the ANC's decision.

PAC national executive committee member Modini Maivha said that, not only had the ANC shown disrespect for the PAC, it had displayed naked arrogance and undermined PAC leaders who had fought for freedom.

"Our dreams for freedom have turned sour. What we are witnessing here is the reversal of freedom to suffering under this so-called people's government of today," Maivha said.

He said he was surprised that there was no monument in the country to honour former PAC leader Robert Sobukwe.

"But that issue will no longer be negotiable. We are going to erect one using taxpayers' money," he said.

Azapo's Gauteng chairman, Mankoto Lesufi, said the ANC had earned praise for delivering beyond expectations - for doing nothing.

"The ANC is forever milking the nation but today they want to jump around and claim legitimacy of what was fought for in 1960," he said.

"The people of Sharpeville died for our rights and freedom but the people of Soweto are benefitting from what our leaders died for," said Dutch Porogo.

"How [would] they feel if we could hijack their June 16 celebrations and have them here?"