With the new Energy Efficiency building regulations placing pressure on the building industry to adopt eco-friendly approaches, there is room for more creativity - and creativity in abundance was evident in the talk by Cape Town architect Y Tsai at the Design Indaba Conference last month. 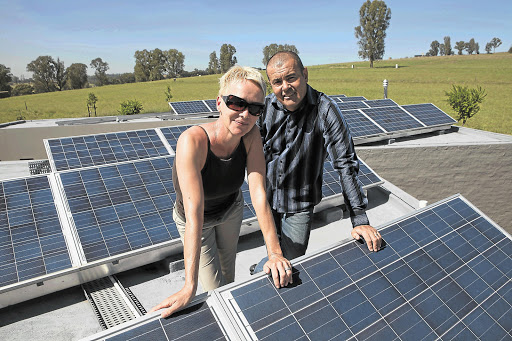 Dorris and James Forbes on the roof of their R29-million home, which is powered by solar panels Picture: RAYMOND PRESTON

Dorris and James Forbes on the roof of their R29-million home, which is powered by solar panels Picture: RAYMOND PRESTON

Tsai says his firm, Tsai Design, works with clients who cannot afford to go through the process of registering for green accreditation with the Green Building Council of South Africa . Instead, they work with simple ideas to make a big difference.

"We do not do anything hi-tech. We simply apply basic green and affordable ideas," he says.

The Urban Mosaic Project is an idea that has won Tsai the Your Street Cape Town Challenge. The aim of the project was to find a way to decrease the speed of fire when a shack burns down while also beautifying informal urban dwellings in townships.

"Fire-retardant paint is traditionally used in skyscrapers, but it is very expensive," Tsai says.

"I found a local manufacturer who makes non-toxic, cheap paint, which we tested on four shacks in a burn test. The results were very good."

Tsai believes building in ways that are socially responsible and green begins with working with what you have.

"South Africa is only at the beginning. "Green technologies are still expensive and local producers are yet to start fully embracing 'green thinking'," he says.

Johannesburg architect Pheta Mofolo says: "It is mostly big corporations that are investing in green buildings. "

The Vodafone Innovation Centre building in Midrand was the first building in South Africa to be awarded a 6-star green rating by the GBCSA.

TIPS FOR AN ECO-FRIENDLY OFFICE: