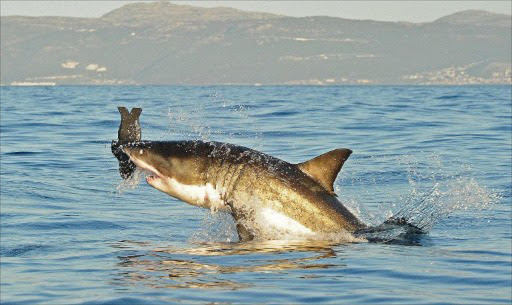 A Great White shark jumps out of the water as it bites a fake decoy seal near False Bay. File photo.
Image: Carl de Souza

A shark research permit for a US-based documentary maker was cancelled with immediate effect after a deadly shark attack in Kogel Bay in Cape Town on Thursday, an official said.

"I cancelled all the shark research permits for the project ten minutes ago when I heard about it," director of Biodiversity and Coastal Research, Alan Boyd, said.

"This incident is a tremendous tragedy and I'm very shocked. No more field work will be proceeding from here on out."

The City of Cape Town closed the Kogel Bay beach, between Gordon's Bay and Rooi Els, after the body of the 30-year-old shark attack victim was recovered.

"We have closed the beach because there are still white sharks present in the water," spokeswoman Kylie Hatton said.

The city said it was investigating and would provide more details when available.

Boyd recently granted a research permit to US-based documentary maker Chris Fischer to film great white sharks in the Cape. At the time it caused fears this could attract sharks to populated beaches. Fischer had been in the country for the last month capturing and filming sharks in their natural habitat for the National Geographic documentary "Shark Men".

Dirk Schmidt, a wildlife photographer and author of "White Sharks", had called for a high shark alert to be issued, saying it was prudent.

"Unusual white shark behaviour and an increased presence, and possible shark-human interaction or even attacks cannot be excluded," Schmidt said at the time.

His concern was that up to five tons of chum (bait) would be used to attract sharks to the boat. He said the chum slick could be blown closer to beaches by on-shore winds.

At the time Boyd issued the permit, he said the chumming would have little effect close to shore, especially as the large amount would be used over a 20-day period all along the southern coast.