IT HAD been a long three days, with four of his legal colleagues having already addressed the court. 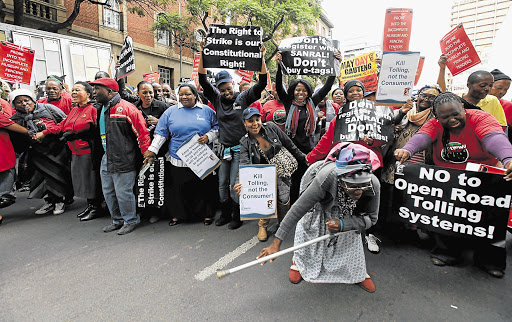 His argument was a final attempt to convince Judge Bill Prinsloo, sitting in the High Court in Pretoria, that the Opposition to Urban Tolling Alliance's (Outa) plea to interdict e-tolling was right and just.

For over an hour Alfred Cockrell SC argued that the wool had been pulled over the South African public's eyes - and those of Transport Minister Sbu Ndebele - by the SA National Roads Agency.

He said Sanral had been warned that drivers who defaulted on e-toll payments threatened the management of the project.

His smoking gun was a steering committee report that had been extensively referred to during the three days.

In it Sanral had blanked out warnings over the impact of default payments - but Sanral's co-defendant, the Transport Ministry, had kept the recommendations in its report.

"Non-compliance (in paying e-tolls) was indeed a reason not to use e-tolls to recover costs. That would be practically unworkable. Sanral was warned about that by the steering committee and ignored it," said Cockrell.

He said Sanral had also failed to outline to Ndebele just how much it would cost to collect toll fees - and used a "thumb-suck" estimate of R200-million as annual operational costs to convince him.

And, he said, Ndebele had approved the e-tolls on the premise that there would be adequate alternative routes.

As Cockrell spoke, Sanral chief executive, Nazir Alli, who cut a calm and confident figurethroughout the proceedings, paced in and out of the courtroom in urgent discussions with his legal team.

Within an hour of Cockrell speaking, the nation heard that the ANC and Cosatu had decided to postpone the e-toll roll-out for another month, pending a review.

Cockrell's argument capped a legal battle that involved just under 2500 pages of founding and answering affidavits as well as the annexures of four legal teams.

Earlier, Alistair Franklin SC had argued that Sanral's R20-billion debt to build the improved highways was guaranteed by the government and there would be no financial loss for Sanral if it was interdicted as it had not yet started collecting toll fees.

But Sanral's team, led by David Unterhalter SC, said the effect was the same as asking a shopkeeper to shut its doors in the hope that creditors would be able to wait.

He said Sanral had been waiting since February last year to accrue some form of income and it would lose R225-million a month if the e-tolls did not go ahead.

Jeremy Gauntlett SC , who argued on behalf of the National Treasury, told the court that, if e-tolling was stopped, the government would be faced with a substantial capital debt.

Outa's first sign of victory came on Wednesday afternoon when its application to hear the matter urgently was granted on the basis that the public had been in the dark until February this year when the implementation date for e-tolling was set and the tariffs were later introduced.