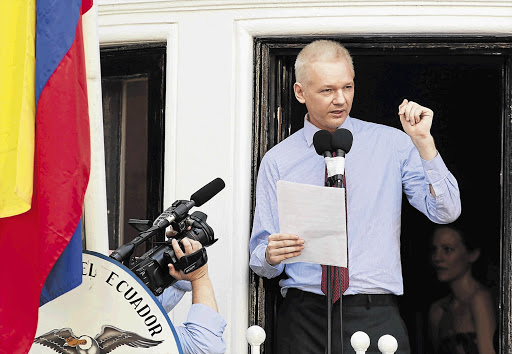 WikiLeaks founder Julian Assange, speaking from the Ecuadorean embassy in London, calls on US President Barack Obama to end the 'witch-hunt' against WikiLeaks. File photo.

Wikileaks founder Julian Assange used the balcony of the Ecuadorean embassy yesterday to berate the US for "threatening freedom of expression" and called on US President Barack Obama to end what he called a witch-hunt against his whistle-blowing website.

He was speaking from within Ecuador's London mission to avoid arrest by British police who want to extradite him to Sweden for questioning about rape allegations.

Pitching himself alongside Russian punk band Pussy Riot and the New York Times newspaper, Assange said the US risked shunting the entire world into an era of journalistic oppression. He did not deal with the rape allegations.

"As WikiLeaks stands under threat, so does the freedom of expression and the health of all of our societies," Assange said.

"I ask President Obama to do the right thing: the US must renounce its witch-hunt against WikiLeaks," Assange said.

Asylum in Ecuador marked the latest twist in a tumultuous journey for Assange since he incensed the US and its allies by using his WikiLeaks website to leak thousands of secret US diplomatic and military telegrams in 2010 in disclosures that embarrassed governments across the world.

Assange, 41, took sanctuary in the embassy in June, jumping bail after exhausting appeals in British courts against extradition to Sweden, where he is wanted for questioning regarding allegations of rape and sexual assault against two women.

He says he fears Sweden will hand him over to the US where, in his view, he would face persecution and long-term imprisonment. The US says it is not involved in the matter.