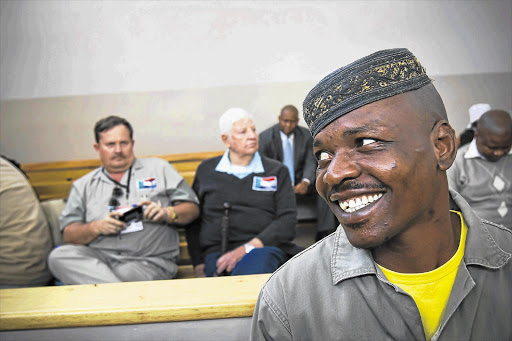 Chris Mahlangu, the man convicted of murdering Eugene Terre Blanche, has accused the former AWB leader of infecting him with HIV.

Mahlangu, 30, also told the court that he did not plan to murder Terre Blanche, adding his "heart is feeling bad" now that he is dead .

As sentencing arguments began in the Mafikeng High Court, sitting in Ventersdorp yesterday, Mahlangu expressed disinterest in the length of sentence he might be given, saying he just wanted the money Terre Blanche owed him.

The right-wing leader was bludgeoned to death on the Easter weekend of 2010, sparking fears of racial tension ahead of the soccer World Cup, hosted by South Africa.

Probation officer Johan Engel argued that 18-year-old Patrick Ndlovu, who was acquitted of the murder but convicted of house-breaking, had "shown remorse" and should not be jailed.

Ndlovu has spent the past two years in a place of safety where, Engel said, he "learned from his mistakes and participated well in therapeutic programmes".

In mitigation of sentence for Mahlangu, clinical psychologist Henk Swanepoel detailed his interview with the killer, whom he described as having a "low intellect" and living in a fantasy world. Mahlangu told Swanepoel that he had been raped by Terre Blanche minutes before the murder. But he could not say whether a condom had been used.

Mahlangu has always maintained that he was raped by Terre Blanche but his claims were dismissed by Judge John Horn when he convicted him on May 22. But Swanepoel told the court yesterday that Mahlangu "speculates that Terre Blanche infected him with HIV".

Mahlangu has not testified since the trial began. His version of events was not heard until Swanepoel's testimony.

Mahlangu was orphaned at the age of nine when his mother died in a fire. He supported himself by selling sweets at a taxi rank and did not go to school. He spent much of his adult life unemployed.

He started working for Terre Blanche as a cattle herder and gardener in 2009, earning, he testified, R10 or less a day.

He wanted to visit his wife and children for the 2010 Easter weekend and needed Terre Blanche to pay him.

But when Mahlangu demanded his salary from Terre Blanche, the right-winger "grabbed me by the neck, ripped off my pants and raped me".

Swanepoel admitted under cross-examination that the judge had dismissed the claims that Mahlangu had been raped .

Terre Blanche's widow, Martie, said she did not hate her husband's murderer and was not bitter. Her feelings about the crime were read out by Engel.

She had told Engel that she was depressed, had lost 40kg since the murder and would not be able to grieve properly until the court case had been finalised.