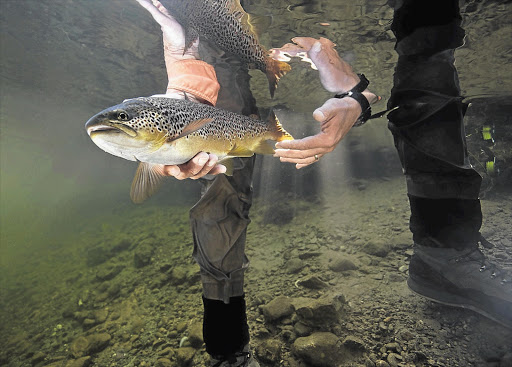 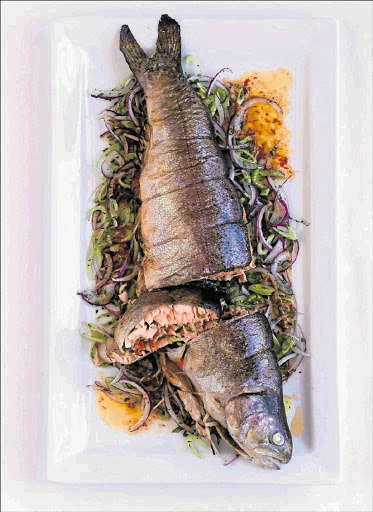 While floating in a boat on Lesotho's Katse Dam, learning how fishermen there breed trout, I was reminded of the gospel where Jesus fed 5000 people with five loaves and two fish. On a daily basis, with the help of modern science, these fishermen perform a similar miracle, multiplying fish to feed hungry masses.

WHILE floating in a boat on Lesotho's Katse Dam, learning how fishermen there breed trout, I was reminded of the gospel where Jesus fed 5000 people with five loaves and two fish. On a daily basis, with the help of modern science, these fishermen perform a similar miracle, multiplying fish to feed hungry masses.

They are aquafarmers who, unlike traditional fishermen, are not throwing nets into the world's streams, bays and oceans to catch increasingly scarce fish. They are breeding freshwater fish and relieving the planet's fish supplies.

According to findings published by the Food and Agriculture Organisation, last year the global consumption of fish hit a record high of 17kg per person. Our increasing appetite for fish may be good for our health, but it is depleting populations of both marine and freshwater species.

Fish farms, like the one at Katse Dam, are a sustainable way of meeting the world's fish demands, without exploiting our fish stocks.

The Katse Fish Farm is situated on the crystal-clear and icy waters of the Malibamatso River in the Lesotho Highlands. It is run by South African entrepreneur Greg Stubbs, who also owns Three Streams, a fish farm in Franschhoek, and his Basotho partner, Stephen Phakizi.

"Trout needs cold, clear water to grow successfully all year round. Our dams and rivers in South Africa get too warm in spring and summer . The waters here are perfect for large-scale production during all seasons," explained Stubbs, an aquaculture specialist .

"Every two months the Three Streams hatchery imports 20kg of disease-free trout eggs from Washington. When they arrive in Franschhoek, the eggs are hatched and once they weigh about 250mg, we move them to nursery tanks. Once they've grown to about 1.5g to 2g, they are carefully transported to the Lesotho Highlands in specialised tanks with oxygen and filtration systems. There they are raised in the waters of the Katse Dam," said Stubbs.

The Katse Fish Farm is an example of how fish farming can help feed a growing population and help heal the marine ecosystems battered by overfishing.

Boikanyo visited the Katse Fish Farm as a guest of Woolworths

Debone the trout, or ask your fishmonger to do so. Preheat the oven to 240C. Heat small, lightly oiled frying pan and fry the five-spice powder and ground coriander, stirring until fragrant. Stir in sugar and lemon juice, then remove from the heat. When cool enough to handle, use your fingers to rub the spice mixture into flesh of the trout. Combine leek, pepper and coriander leaves, and use to fill the cavity of the trout. Using kitchen string, tie the trout at 3cm intervals, securing the filling down the length of the fish. Heat a heavy baking tray in the oven. Wrap tail and head of trout in oiled foil. Line tray with baking paper then place trout on it. Roast for about 20 minutes. Allow to sit for 5 minutes before cutting into slices. Remove string before serving. - Taste magazine