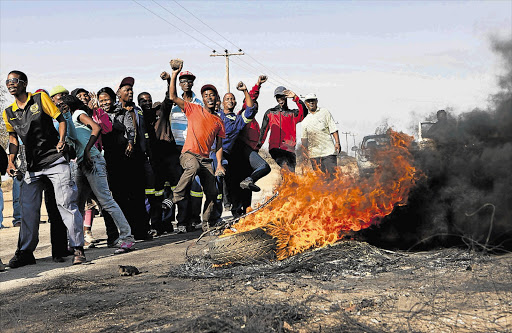 Protesters block a road leading to Cassel. The Northern Cape has been hit by protests over untarred roads Picture: LAUREN MULLIGAN

Children's laughter filled the air in Cassel village, in Northern Cape, as they played on a dusty soccer field yesterday.

They should be in class but, for months now, violent agitation for tarred roads has shut school doors .

They are not the only children roaming the streets. Thousands of others in the Taolo Gaetsewe district municipality have had to stay at home since the violence erupted.

Yesterday, the main source of contention - a dirt road that runs through the village - was littered with branches, boulders and burned tyres.

The acting premier, Grizelda Cjiekella, warned that those "destroying children's right to education" through intimidation will be brought to book.

But the alleged ringleaders deny that they are culpable.

''The children are the ones who decided not to go to school because they are also adversely affected by the condition of the roads," said Michael Legalammi, the self-proclaimed "chief marshal" of the protests.

"They have to walk long distances to school because transport providers do not want their vehicles driven on these terrible roads.''

A parent, who did not want to be named for fear of victimisation, said children were violently forced out of school to support the protests.

"Yes, our roads are bad but I believe children should not have been dragged into this mess at the expense of their education," she said.

Aubrey Itumeleng, one of the protest leaders, said that in June last year the villagers were promised 120km of tarred road but the provincial roads department later claimed that it would be able to tar only 50km.

"That is when we decided to take to the streets to fight because that is the only language our government understands," said Itumeleng.

Cjiekella said the violence that had crippled the area had " political undertones".

She admitted that there were service delivery problems but gave a detailed account of how much money had been spent on housing, and education, and on health services and other infrastructure.

Cjiekella said that over the past five years the roads department had embarked on 10 major projects in the John Taolo Gaetsewe district municipality - at a cost of more than R500-million.

"It is a shame that children and older people are used [in these protests], and their lives and future put in jeopardy by ill-disciplined and disgruntled individuals. Inciting violence and depriving children of education provided by this administration is a criminal offence, and we condemn it in the strongest possible terms," she said.