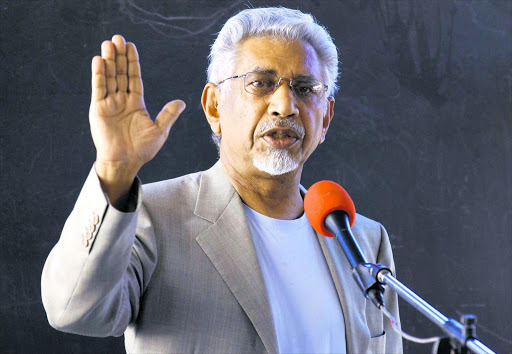 "We won't legitimise stories... by getting me or the presidency to comment. You don't expect him [President Jacob Zuma] to comment on this," Maharaj said on Wednesday.

"You [journalists] must pay the price and take responsibility for writing stories saying that South Africa is a banana republic because you might believe it."

Earlier Malema told soldiers at the Lenasia Recreation Centre, south of Johannesburg, that South Africa was a "banana republic" that did not follow the rule of law.

"No one is above the law, not the military, not the presidency, and not Parliament. Every court decision must be respected. We must respect the courts, but the leadership of this banana republic disrespects the courts."

He said the government had failed to adhere to court orders in three instances. It had not provided the Democratic Alliance with the evidence it wanted in the corruption case against President Jacob Zuma, had not delivered textbooks, and was not re-instating 1100 soldiers put on special leave for protesting at the Union Buildings in 2009.

The country's confidence in its leadership needed to be rebuilt.

"I don't know what is a priority to him, maybe getting married every year. He specialises on that one. Maybe that is what is going right for him.

"Here, children don't have books, people in hospitals don't have the necessary machines, they don't have roads or clean water."

Malema repeated an earlier accusation that Zuma was a dictator.

"These are the symptoms of dictatorship, a political principle in the form of a president becoming more rich and rich, and those that he is leading becoming more poorer and poorer."

He said he did not plan to de-stabilise the government.

"We will never conspire with the soldiers, or anybody to engage in an illegal activity. Our government is leaderless. Your [the soldiers'] issue now is that from 2009 until now, your issue is not resolved."

He said he had always told Zuma "votes were not cheap or free".

"Once president Zuma began to do other things, and move away from that mandate, that's when we said this is something else."

Malema criticised the way in which the problems at Lonmin's platinum mine in Marikana, North West, had been handled.

"Government... instead of listening to workers in Marikana, is killing those workers... That is the government we have voted for."

When he had sought to reassure the miners that they still had a future, he was called an opportunist, Malema said. People had only their voices and minds to fight "this barbaric regime under President Jacob Zuma".

Malema then led the crowd in a version of dubula ibhunu (shoot the boer) called "kiss the boer".