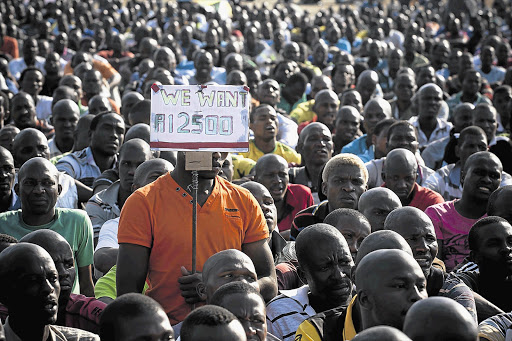 Strikers at Marikana platinum mine, near Rustenburg, who are joining forces with nearby Amplats workers in a wage battle that threatens to paralyse platinum mining Picture: DANIEL BORN

As miners vowed yesterday to shut down South Africa's platinum industry, high-level meetings were being planned to rescue the strife-torn mining sector.

According to ANC insiders, an urgent national executive committee meeting will be held within days to discuss how to bring under control the chaos in mining and the unfettered power of expelled former youth league leader Julius Malema.

"We should be at the centre of what is happening now in the mines without undermining Cosatu. Being quiet will not help us. We need to show that we are a governing party together with our alliance partners," a senior ANC insider said.

Last night, mining bosses met senior government officials and union leaders in an attempt to stem the violent strikes that started a month ago at Lonmin's Marikana mine.

Anglo American CEO Cynthia Carroll said they were "in touch with the authorities at the highest level" to identify how they could work together. The "authorities" were both government and trade unions, according to a spokesman.

The National Union of Mineworkers has called a special national executive conference tomorrow also to discuss the events at Marikana and other platinum mines.

"We are highly concerned because these people can lose their jobs," NUM spokesman Lesiba Seshoka said last night.

He pointed out that both Amplats and Goldfields had issued retrenchment notices in June and July and NUM was concerned that the strikers were handing mining companies the power to retrench them.

Yesterday, striking miners at Marikana and the nearby Anglo Platinum mine outside Rustenburg formed a "war room" to fight together for salaries to be raised to R12500 a month. Almost 10000 miners from Amplats are expected to join the strikers at Lonmin.

A mining executive, who did not want to be named, described the sector as "a runaway train".

"The best-case scenario for the mining sector is to return everything to 3pm on the afternoon of the shooting at Marikana. But that still is a nightmare for management, workers and shareholders because it would mean job losses, mine closures and economic decline."

The platinum industry, he said, had been in severe pain already for a number of quarters. The mines simply could not pay higher wages, and workers seemed unwilling to back down.

Marikana had been a loss-making operation before the shooting in mid-August, as were many mines, according to a research report by JP Morgan, he said.

The executive was not aware of any industry-wide measures to save the industry nor of talks between government and companies.

To normalise things, he said, someone had to stand up and speak the uncomfortable truth that wage increases would not happen but mine closures would.

In North West, mineworkers rejecting the formal unions have formed a Rustenburg Workers and Communities Forum under the leadership of the Democratic Socialist Movement, affiliate of the Committee for Workers' International.

Executive member Mametlwe Sebei yesterday tried to persuade miners that a general strike should start in Rustenburg and be followed by a national strike and march to the Union Buildings.

"This battle can be won only if we are united," Sebei urged at a mass meeting at Amplats.

An estimated 12000 miners went on strike at four Amplats shafts on Tuesday night, demanding salaries of R14500 a month.

One of the strike leaders, Evans Ramokga said they had been trying since May to get NUM to take their demands to management. "NUM rejected us and we decided to do everything ourselves."

In Marikana, Bishop Joe Seoka said an end to the impasse was in sight as workers' representatives agreed to participate in the CCMA-facilitated negotiations, which will resume today.