Petrol price on its way to a record high 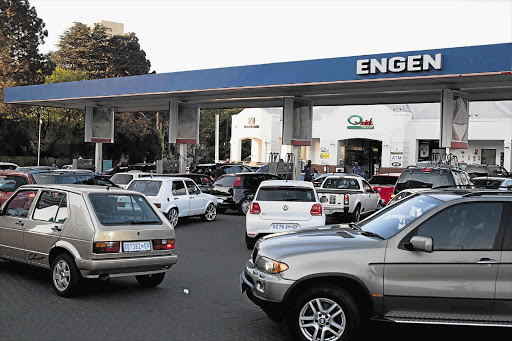 South Africa will be hit by the second-highest petrol price increase in three years as motorists tried to fill up at the Engen garage in Rosebank last night Picture: THAPELO MOTSUMI

Brace yourself for another fuel price shock.

The latest statistics from the Central Energy Fund point to a likely increase of 37c a litre on petrol and 49c on diesel next month.

Unless the rand gains against the dollar, or the price of crude oil drops, the petrol price will reach a record high and hit cash-strapped consumers in the gut.

The petrol price increased by 83c a litre only two weeks ago.

Not only commuters feel the bite of more expensive fuel. Consumers will be hit again when retailers and service providers pass their higher costs on to them.

Food inflation was 5.3% in July year-on-year, but when Stats SA publishes its Consumer Price Index for August on Wednesday a clearer picture will emerge because it will take account of that month's fuel-price increases.

Higher inflation makes it increasingly unlikely that the Reserve Bank's monetary policy committee will repeat July's surprise cut in the interest rate. The committee meets this week and is expected to announce a decision on Thursday.

Nedbank economists noted in their latest monthly outlook that most analysts expect no change in interest rates.

"Inflation will probably trend higher after the downward surprise in July because the weaker rand, and higher food and oil prices, apply upward pressure," they said.

The Reserve Bank's quarterly bulletin last week revealed that South Africans are continuing to sink ever deeper into debt. The ratio of debt to disposable income climbed for the first time in four years. This might weigh on the monetary policy committee. Most economists expect the repo rate to remain at 5% and the prime lending rate at 8.5%.

People are finding it difficult to service their debt even with rates at record lows.

Higher fuel prices will gnaw at disposable income. For the past couple of years consumer spending has been the engine of economic growth.

The latest numbers show that the rate of growth of the gross domestic product is slowing. The data do not yet include production losses at mines since August, when unrest started at Marikana and spilt over to other platinum and gold mines.

The unrest will make investors nervous and probably weaken the rand. If the rand slides further against the dollar, the increase in fuel prices could be even higher.