Is Div right about race bias? 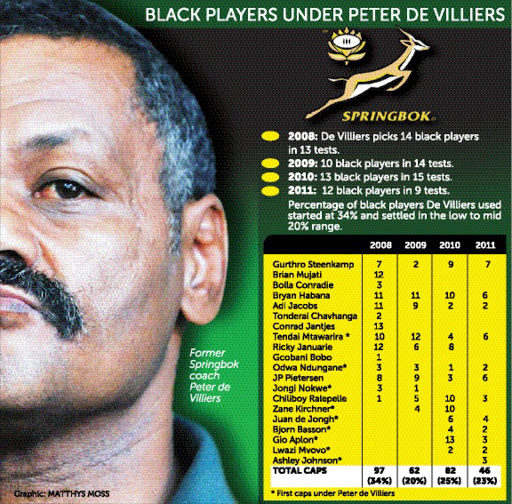 "We are turning a lot of black people against ourselves by making the team white," said De Viliers, who picked 14 black players in 2008, his first year as Bok coach.

De Villiers told the radio station that "nobody will talk about these things, but I just have to".

"We need to know in what country we live."

Meyer has handed out 26 caps to seven black players so far this year.

The most caps went to regulars Bryan Habana and Tendai Mtawarira (seven each). The others are JP Pietersen (three before he was injured), Zane Kirchner (five), Gio Aplon (one) and Lwazi Mvovo (three). Juan de Jongh and Elton Jantjies were called up, but not used.

De Villiers questioned why Aplon, De Jongh, Siya Kolisi and Chiliboy Ralepelle were not given a chance by Meyer. Kolisi and Ralepelle are both injured.

Aplon played in the third test against England and De Jongh was on the bench against the All Blacks last week.

In Meyer's first game in charge against England in Durban he selected four black players in the starting lineup - Habana, Pietersen, Mtawarira and Kirchner.