Little One with big chance 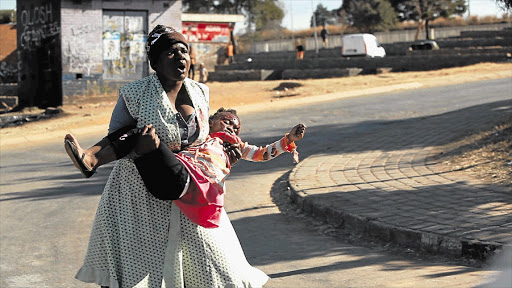 Lindiwe Ndlovu in a scene from Darrell Roodt's latest film Little One, which has received the National Film and Video Foundation's backing for submission to contest Best Foreign Language Film at the Oscars in February Picture: SUPPLIED

Seven other films were in the running but only Darrell Roodt's 'Little One' really looked like a shoo-in to be South Africa's submission at next years' Oscars in the best foreign language category.

The National Film and Video Foundation, which enlisted an Academy Award selection committee, including industry veterans Mfundi Vundla and Terence Bridgett, announced at the weekend that the film would be put forward as the country's best bet for an Oscar.

The decision was taken on Friday night following two days of judging at which The Times was present.

The final Oscar nominations list for the February 24 ceremony will be announced on January 15.

The Little One 's nomination follows that of Oliver Hermanus' Skoonheid , which lost out on a nomination at this year's ceremony.

Roodt's newest film tells the moving story of a six-year-old girl who is left for dead in the veld near a Johannesburg township after being raped and badly beaten.

She is found by a middle-aged woman, Pauline (played brilliantly by Lindiwe Ndlovu), who takes her to hospital, then oversees her recovery while helping her to rebuild her confidence and sense of self-esteem.

When her attempt to adopt the girl fails, she kidnaps her.

Roodt's film Yesterday, starring Leleti Khumalo, was nominated in the foreign language category for the 2004 Academy Awards but lost out to The Sea Inside, by Spain's Javier Bardem.

THE MAKING OF AN SA CLASSIC

THE Times: Lindiwe Ndlovu carries the film exceptionally well, just like Leleti Khumalo did in Yesterday. Are you involved in the casting of these strong female characters, and is it a conscious decision to craft your stories around them?

Darrell Roodt: It is weird how I've built up a body of work with females as lead characters. I guess it's because they're the ultimate underdogs, in every sense. When you pit a woman against the odds, it makes for powerful drama.

I think there's spiritual continuity between Leleti in Yesterday and Lindiwe in Little One. When I made Winnie, Lindiwe played a small role so when we were casting Little One my producer, Christianne Bennetto, immediately suggested her.

And, boy, was she ever so right - you just point the camera at her and the story unfolds in her eyes.

TT: How did the idea for Little One come about?

DR:I saw a TV news insert a few years back. A six-year-old had been raped and so severely hurt that she was only filmed from the chin down to hide her damaged face. I originally wanted to film her from the chin down but I'm glad I didn't.

Seeing that little eye peeping out from the bandages or paper bag is priceless. I know it's horrible and depressing on the surface but I hope it's so much more than that - it's about love and compassion and, ultimately, respect for humanity.

TT: What's your approach and secret to success in making such critically acclaimed films?

DR: I've always tried to invest my films with a "sense of cinema". Movies are my way of life; without them I would perish. I always try to make my movies feel like, well, "movies".

The story is important. You have to find something unique if you want to reach an audience.

TT: How do you know you're onto a winner ?

DR: You never know but if the movie touches you then maybe, just maybe, the audience will get the same feeling.

TT: Do you think the government is doing enough to assist filmmakers?

DR: The Department of Trade and Industry and the Industrial Development Corporation provide invaluable support. If you follow the rules you'll find the road is paved with gold!