Toyana, the Lion of Soweto 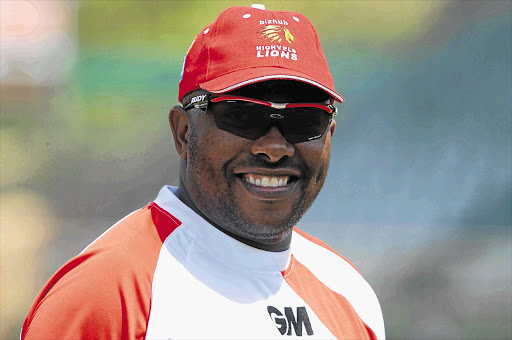 Geoff Toyana, head coach of the Highveld Lions, said he owes it all to Soweto.

"I was born and bred in Soweto, I played for SCC, and I still have close ties to Soweto cricket," Toyana said.

"It's a good thing for the young players coming through to be able to identify with someone like me. I'm where I am today because of Soweto."

But while his personal cricket wish list has been fulfilled, he would like to see a return to the days when international teams paid their respects to Soweto in tour matches against nominally representative sides.

Toyana's appointment was a great leap forward for transformation in cricket as it marked the first time a black African had been handed the reins of a South African franchise.

As one of the original products of Ali Bacher's development programme and then a prominent first-class player, with 84 first-class caps to his name, does Toyana feel he has come full circle in cricket now that he is a head coach?

"It does feel like that, but I stopped playing in 2008 and I never thought that in so few years I would be a franchise coach," he said.

"I'm looking forward to the challenges that lie ahead.

"I know what it takes to perform at this level as a player, and in the last couple of years I've learnt so much about coaching.

"On top of that, I've got guys in my squad like Thami Tsolekile, whom I played against, and guys like Neil McKenzie, whom I played with, and it helps that we knew each other as players."

At a local level, two years in the wilderness for Gauteng cricket was a time of progress and plenty for the game in Soweto.

That's the opinion of Gordon Templeton, chairman of the Soweto Cricket Club: "Since the Gauteng Cricket Board was put under administration by Cricket SA on October 31 2010 there has, weather permitting, been a premier league game or a President's League game at the Soweto Cricket Oval during the season.

"Prior to that, for four seasons there was an absence of premier league cricket in Soweto."

The period of administration ended on August 31, but the game goes on in the township.

Other sectors of cricket in Gauteng saw CSA's control of the game as a yoke they couldn't wait to throw off, but for cricketers in Soweto it meant upgraded facilities, more hands-on administration and a sharper focus on what was good for the sport rather than on its politics.