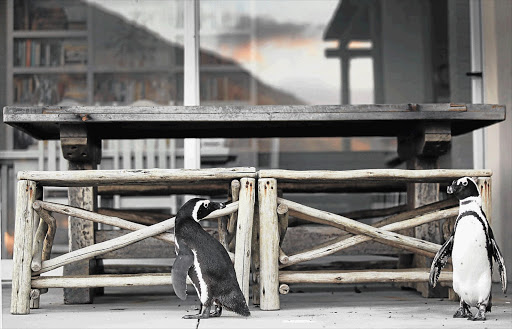 Patios and gardens in Betty's Bay have become breeding areas for a colony of African penguins. While the birds are enjoying the home comforts, their cacophonic noise - 'like donkeys braying' - is leaving residents sleepless Picture: SHELLEY CHRISTIANS

They are everywhere: in the bushes, on the lawn, the patio, the driveway - they've even been caught breaking and entering homes.

The African penguin might be endangered, but homeowners in Stony Point in Betty's Bay believe the breeding birds are "endangering" the lives of residents.

Thousands of African penguins are driving people in the Western Cape town crazy. While many have holiday homes there, "79 and a quarter-year-old" Barbara Wallers has lived in the area since 1947, and said she gets little sleep because the birds make too much noise.

"Just a month ago, I found one in my kitchen that s**t all over the floor. I tried to get it out with a swatter, but it wouldn't go. Eventually someone caught it," said Wallers, as she tried to chase dozens of penguins from her friend's property.

"Listen to them. They grunt and bellow and squeak all night. I can't sleep," she said.

"When I call the authorities to complain, they say I am rude. Who wouldn't be?

"I can't use earplugs at night because we have burglaries."

Wallers said they have always had the occasional penguin in the garden, but in the last two years things have got out of hand.

Johannes Klopper, a retired medical doctor from Durbanville, said the penguins have kept him away from his holiday home.

"On my property I have between 30 to 50 nests. They cause such a big mess that it really has become a health hazard. My wife doesn't want to go there now because we cannot sleep at night," said Klopper.

He said it is difficult for him, at his age, to clean up the guano that smells terrible and kills plants.

Klopper and Wallers claim the municipality promised to erect a fence large enough to keep the waddling birds away from the homes, but it has been an empty promise.

The existing fence has not been maintained and is riddled with holes.

The African penguin colony in Stony Point is one of two land-based breeding colonies. According to the Southern African Foundation for the Conservation of Coastal Birds, African penguins mainly nest on offshore islands.

They are also called Jackass penguins because of their "donkey-like bray", which keeps Stony Point residents wide awake at night.

However, Mike Oosthuyzen, who has a holiday house there, said he did not mind the penguins and liked having them in his garden.

But things may quieten down soon. Fanie Krige, spokesman for the Overstrand Municipality, said problems with the fence will "hopefully" be resolved in a few months' time, as they recently received authorisation to extend it.

He said the fence can only be put up after the breeding season is over, as the nesting penguins would otherwise have no access to the sea.

"The management of the area is done in close collaboration with Cape Nature," said Krige.

"One method to try to reduce the problem with the stench of guano is to make use of sprinkler systems."

Krige said while penguin numbers are decreasing everywhere else, the contrary is true for Stony Point. There are between 4500 and 5000 penguins and 1988 active nests.

"It may have to do with the availability of food resources. There is also a theory that some of the penguins have moved from nearby islands to Stony Point."

According to Sanccob, the African penguin: