Toy joy for the big boys 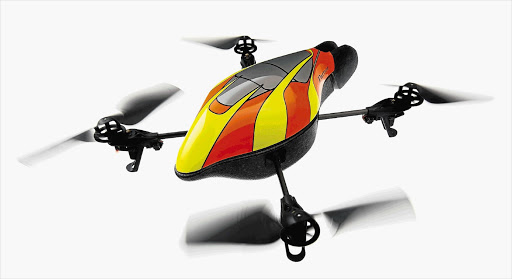 Easily controlled by tilting your iPhone, the AR.Drone will stream you a video of what it sees from the air through two cameras

For a few minutes all the adults became children too. It was a four-year-old's birthday party and, after the blue-interior Spiderman cake, the biggest thrill was a remote-controlled helicopter.

While these are generally set to amuse children, the fathers were enthralled - because, unlike most RC gadgets, this one, called an AR.Drone, is controlled by an iPhone.With a camera mounted in front and below the helicopter you get a live video stream from the camera you've selected. Because the helicopter is first on the floor, the video starts with your feet, and then as it floats up, a little magic happens. Kids not only see the helicopter take off but they see their faces in iPhone video. Dads, it should be noted, were just as impressed to see themselves.

Better yet, the drone is controlled using the built-in gyrometer of the iPhone (or other Apple devices or Android phones), and by tilting it you can control the helicopter. This is much more intuitive in the new version.

The French company, Parrot, captured the popular imagination with the AR.Drone in January 2010 at that great carnival of fresh products, the Consumer Electronics Show in Las Vegas. It's the launch pad - literally in this case - for a plethora of gadgets, televisions, computers and the like; even though it comes just after the festive season rush.

In 2010 all the press belonged to the AR.Drone for its stand-out use of the iPhone as a controller. It uses its own little Wi-Fi hotspot to connect to the phone and may be the ultimate geek toy.

Parrot recently released the AR.Drone 2.0 (AR stands for augmented reality because it was originally designed so game developers could make their own games for the flying, video-streaming gizmo). It has a better camera (it now shoots 720p video) and a host of other improvements, including indoor and outdoor modes. Technically it's a quadriceptor - it has four rotors - and the polystyrene body (for indoor mode) protects the blades (and whatever they may crash into as you learn to fly it).

It has about 12 to 15 minutes of flying time (and 90 minutes to recharge the battery) and you can even flip the drone right over, once you've mastered the flight skills. It costs R3500 and is available from importers SMAC (smac.co.za).

It's the ultimate big-boy toy, but who can blame boys (big and small) for loving something that is so easy to fly?