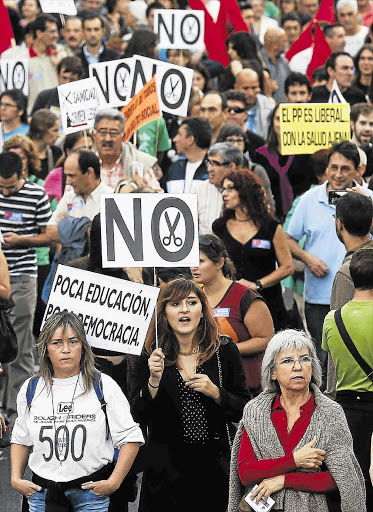 Banners tell the story as Spanish demonstrators take to the streets in Madrid on Saturday in protest at public health and education cuts Picture: ANDREA COMAS/REUTERS

Grecce is plunging into an economic and social crisis as desperate as Germany's under the Weimar Republic, the Greek prime minister, Antonis Samaras, has warned in an appeal for bailout leniency.

Samaras told Germany's Handelsblatt newspaper that the Greek government was "at the limits of what we can ask of our people. The cuts we have already made have cut to the bone."

Athens desperately needs the next à31.5-billion tranche of its bailout, which has been delayed for months, while the government pushes through more austerity measures as demanded by the terms of the bailout. Samaras said the money in Greece would last until "the end of November. Then the coffers are empty".

"I cannot and I will not deny it: Greek democracy is facing perhaps its biggest-ever challenge," said Samaras. "People are at the point at which they are saying: 'We are prepared to make sacrifices but we want to see light at the end of the tunnel.' Otherwise, everything is in vain."

Referring to the harsh First World War reparations and rampant inflation that brought Adolf Hitler to power, Samaras said: "It's about the cohesion of our society, which is being threatened by rising unemployment, like at the end of the Weimar Republic in Germany."

He repeated that Greece wanted more time, not more money.

"What we need is more time for budgetary consolidation, but not necessarily more aid," he said.

Berlin announced that Chancellor Angela Merkel would travel to Athens tomorrow - her first trip there since the crisis started. It is a sore point in Greece that so few European leaders have been to Athens to see the turmoil for themselves.

Nevertheless, the chancellor's spokesman, Steffen Seibert, insisted that Greece had to stick to the bailout agreement. But he said: "The message that Germany can take to Greece ... is that we want to help Greece stabilise itself within the eurozone. We are doing that by massively contributing to the two aid packages that are supposed to help Greece come out of the crisis."

There was uncertainty as Spain continued to resist pressure from European leaders to ask for financial help from Brussels.

Mario Draghi, president of the European Central Bank, said on Thursday that he was ready to unleash his bond-buying programme to help Spain but Madrid made it clear that it was not about to take advantage of it.

And in Portugal ratings agencies warned that the country might need to extend its bailout programme beyond the scheduled three years in the face of weaker growth and a public backlash against austerity. - ©The Daily Telegraph