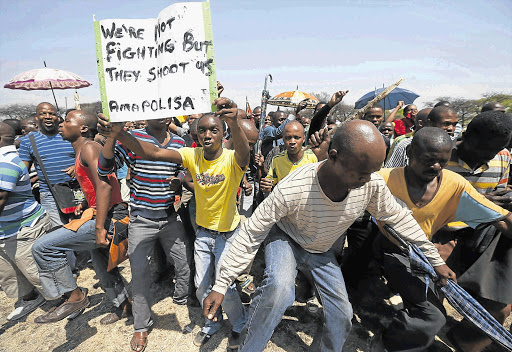 WANTING MORE: Striking platinum miners march near the Anglo-American Platinum mine near Rustenburg, North West Province, on Friday. Amplats fired 12000 workers on the same day, and said 5000 were not likely to be rehired
Image: PICTURE: REUTERS

"Police used teargas, stun grenades as well as rubber bullets," to disperse around 1,000 strikers, said police spokesman Dennis Adriao, adding that they had blocked fire engines in northwestern Rustenburg from an Amplats mine power sub-station that was set alight by suspected striking workers in a pre-dawn attack.

Around 12,000 workers fired for being on strike were reinstated at the weekend and were supposed to return to work on Tuesday morning after a lengthy stoppage at the platinum producer.

Adriao said the fire brigade and the police got a call at around 4am that the Khuseleka sub-station -- which is on Amplats' property, next to the Nkaneng residential area -- had been set alight.

"Since then we have been having running clashes with groups of about 1000 people who formed a barricade to prevent police from entering," he said.

Speaking just after 9am, he said the situation had quietened down, and that the fire had been brought under control, but that the police were still in the area maintaining a high visibility.

"No one is at work today unless they snuck in"

This was despite an offer by the company to reinstate 12000 men sacked for taking part in a six-week wildcat walkout.

Months of labour unrest in the mines have hit platinum and gold output, threatened growth in Africa’s biggest economy and drawn criticism of President Jacob Zuma for his handling of the most damaging strikes since the end of apartheid in 1994.

However, the number of strikes has dropped in the last two weeks amid management threats of mass dismissals and some payment sweetners.

At Amplats’ Thembelani mine near Rustenburg, 120 km (70 miles) northwest of Johannesburg, hundreds of miners barricaded a road to one of the shafts with burning tyres.

“No one is at work today unless they snuck in,” Mayford Mjuza, a worker representative, told Reuters as a police helicopter hovered nearby.

Amplats, the world’s biggest producer of the precious metal, said it was still gathering details on attendance at its four strike-hit Rustenburg mines.

The company said last week it had reached a deal with several unions and would be offering sweeteners such as a one-off hardship payment of 2000 rand ($230) to end a strike that has crippled production.

A return to work on Tuesday was one of the conditions attached to the deal.

However, workers at Thembelani said they were determined to stay away until Amplats matched a salary increase of up to 22% offered by rival Lonmin after a violent wildcat walkout at its nearby Marikana platinum mine in August.

The Lonmin offer came in the wake of the police killing of 34 miners on Aug. 16, the bloodiest security incident since apartheid.

MacDonald Motsaathebe, who has been with Amplats for 12 years, said workers did not agree to the deal struck at the weekend between Amplats and unions including the National Union of Mineworkers.

“We didn’t agree to the offer. We want 16000 rand. Lonmin miners got it, and we want it,” said the 35-year-old, whose salary supports nine people. “We earn peanuts.”

Workers are expected to meet later on Tuesday.

While the situation at Amplats has yet to be resolved, tensions at other mining companies have eased.

Striking workers at gold firms including AngloGold Ashanti and Gold Fields returned to work last week after threats of mass dismissals and an offer of a small pay increase.