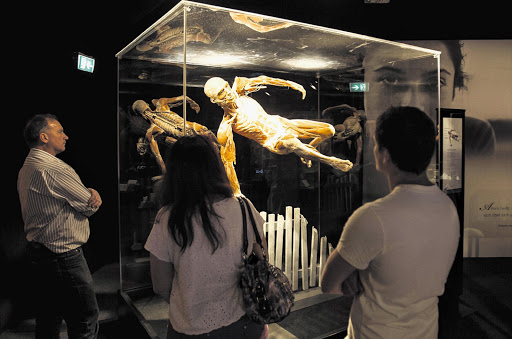 The Body Worlds and The Cycle of Life exhibition opened at the V&A Waterfront in Cape Town yesterday. Bodies are donated to the exhibition and preserved through plastination

Capetonians were seeing dead people yesterday - including a couple of corpses having sex.

The Body Worlds & The Cycle of Life exhibition opened at the V&A Waterfront yesterday without a glitch, despite religious organisations damning it as disrespectful to the dead.

On display were cadavers preserved by plastination.

The exhibition has been taken to 70 cities around the world and its organisers claim that more than 35million people have seen the 200 human corpses on display.

Tyrone Thöle, managing director of the company that organised the exhibition, said it had included an HIV/Aids display specifically for South Africa.

But it was a smoker's blackened lungs and a couple having sex - with the woman wearing only black leather boots - that garnered the most attention yesterday.

Also popular was a high jumper suspended in mid-air.

The exhibition opened at 9am yesterday and by noon more than 60 people had passed through the doors.

Visitor Renette Pretorius, one of the first visitors, said it was "a real eye-opener".

"I have had a child but it is the first time I have seen a foetus so close," she said.

"Though we live with our bodies, we don't know what is happening inside them.

"It is a wonderful thing that the exhibition came to South Africa."

Justine Haupt, a body control Pilates instructor, said: "I think it's a great way for people to learn more about their body.

"I know a little bit about what happens inside.

"It's just so nice to see it in the round instead of just in a book or or as a photograph," Haupt said.

The exhibition, which is dependent on a body donation programme for its specimens, has been billed as the biggest exhibition to have hit Africa.

But, last week, upon hearing about the exhibition Nokuzola Mndende - director of the Icamagu Institute, which promotes African traditional religion - labelled it "madness".

"That is totally against African culture," Mndende said.

"You cannot showcase a corpse in whatever form. I'm shocked that our government can allow it."

And Nabeweya Malick, spokesman for the Muslim Judicial Council, said she did not believe a human body should be displayed for other than medical purposes.