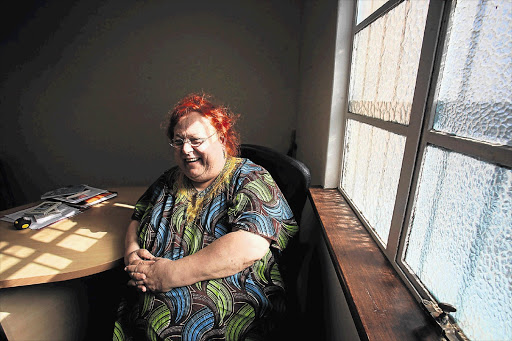 Sally Gross, director of Intersex SA, is one of about 2.1million transgendered and intersexed South Africans who battle Home Affairs for legal recognition Picture: SHELLEY CHRISTIANS

''For 15 months I fell off the edge of the legal world. I ceased to exist as a natural person in South African law."

"It was suggested that I go for surgery as a condition of having an identity. I told them I would prefer a hole driven through my head'' - Sally Gross, born with ambiguous genitals but classified as a man.

SALLY Gross was living in exile in England when her 15-month battle to be legally acknowledged as a woman in South Africa began in 1993.

Born with ambiguous genitalia, Gross was classified as male and called Selwyn but was advised to live as a female in England in 1993 because of her anatomy.

Gross is one of about 2.1million transgendered and intersexed South Africans who battle to be recognised at all by Home Affairs.

Often ridiculed by society, Gross and others like her also have to contend with bureaucratic red tape to obtain identity documents and passports.

In a joint presentation by Intersex SA and Gender Dynamix to the portfolio committee on home affairs yesterday, Gross, director of Intersex SA, said people trying to change the gender given in their identity documents faced insensitive and ignorant officials and reams of paperwork.

In some cases, officials demanded that intersex and transgendered people undergo surgery, medical treatment or sterilisation in order to prove they are serious about changing their sex.

"You can't impose something that is potentially life-threatening on a person in order to get an ID or any kind of official documentation," said Gross.

In a bid to renew her passport, which expired in 1996, Gross tried to have her details changed.

Gross said she had been told she might get the required documentation if she was prepared to have genital disambiguation surgery, whether to be male or female.

"It was suggested that I go for surgery as a condition of having an identity. I told them I would prefer a hole driven through my head."

After she threatened to involve a leading human rights lawyer on the basis of the Bill of Rights, Gross's application for all identifying documentation was eventually approved.

While there is no specific numbers for the transgender and intersex population, Gross said an international study estimated about 1.7% of people fell within this grouping.

She estimates that 4% of the South African population is in this category because people, especially in rural areas, do not reveal their sexual orientation for fear of victimisation.

Despite the Alteration of Sex Description Act coming into effect in 2003, some Home Affairs officials still insist that people with both male and female genitals must show proof that they have had surgery in order to change their gender identities.

According to the act, any person whose sexual characteristics have been altered by surgical or medical treatment or by natural development, or any person who is intersex, may apply to the director-general of the Department of Home Affairs for alteration of the sex description on his or her birth certificate.

Gender Dynamix coordinator Sibusiso Kheswa said some people had been trying to get IDs since 2005.

In the meantime, they could not obtain a driver's licence, banking cards or passports. They could not even vote.

Kheswa, formerly classified as a woman, said it had taken him more than a year to change his identity.

"In the meantime, you are [classified] a male with a female name and then you are accused of fraud," said Kheswa.

"It's not only about what is between a person's legs. It's their sexual characteristics, it's how they feel [male or female] when they walk into a room," said Bornman.

She said the practices at home affairs contravened constitutional rights.

According to provisions in the Alteration of Sex Description and Sex Status Act, a person is legally required to submit a report from a medical practitioner, not limited to a medical doctor, on any treatment or surgeries performed. They must also produce a report by a secondary doctor to validate this.

A copy of the person's birth certificate was also required.

Responding to the presentation, MPs suggested that the problem could be solved through the new biometric smart card ID, which will rely on fingerprint identification.

ANC MP André Gaum said the committee would take up the plight of intersex and transgender people with the Department of Home Affairs.

"Maybe it is only a matter of education, perhaps in the form of a circular," he said.

Perhaps the most poignant and well-known intersex case is that of Olympic athlete Caster Semenya who, after winning gold at the World Championships in Germany in 2009, became the source of a massive athletics' scandal.

Semenya was eventually allowed to participate in women's races, but the young athlete first had to endure a harsh invasion of her privacy and severe scrutiny.

In another case, in 2010, the Labour Court ruled in favour of Christine Ehlers who had been fired by her company for having had a sex-change operation.

Her employers had insisted she have the procedure reversed.