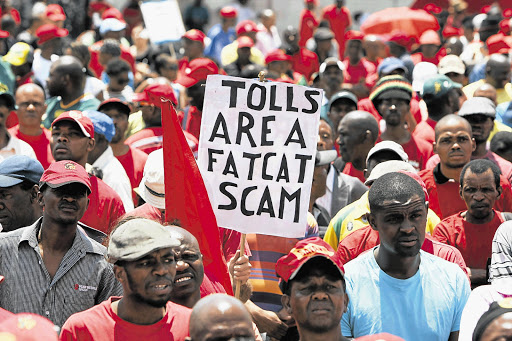 Cosatu's "drive-slow" against the tolling of Gauteng freeways on Thursday was a success, the union federation's Gauteng secretary Dumisani Dakile said.

"As Cosatu we are very happy, the 'drive-slow' was more than successful and raised awareness of the fight," he said.

Dakile said they would not stop fighting against e-tolls until the system was scrapped. The protest was intended to send a message to the government.

"If they have not got the message yet, they will."

Transport department spokesman Tiyani Rikhotso said the government noted the protest action and respected the right of individuals and organisations to protest. He said the department consulted with the public when the process of e-tolling started in 2007.

"All matters of concern were adequately addressed with concerned parties in all these sessions. Assertions that this project is being forced on South Africans are therefore devoid of truth."

The Congress of SA Trade Unions-led protest was to show opposition to the government's plans to toll major highways around Johannesburg and Pretoria.

Two convoys of vehicles drove at 20km/h on major highways around Johannesburg and Ekurhuleni. Protesters sang and danced as police urged them to speed up.

"Traffic was congested on the M1. The action caused the traffic on the highways to back-up."

Shortly after their arrival at Masakhane Street in Katlehong, Cosatu provincial chairman Phutas Tseki thanked the police, unions and motorists for the success of the "drive-slow".

"We are coming here in February and closing down all the e-tolls," he told the group.

Last week, Cosatu threatened to occupy Gauteng streets, and block freeways if it did not receive positive feedback on memorandums handed to several departments.

The Opposition to Urban Tolling Alliance had brought a court application to have the e-toll project scrapped, but a ruling had yet to be made.